follows up the release of

Following the release of Matilda Pearl’s single ‘Linger’, the 18 year-old singer, songwriter drops a vibrant and retro video clip, perfectly matching the song’s disco-pop energy. Arriving ahead of Matilda’s headline show at Northcote Social Club, on July 23rd, the video features footage of Matilda dancing, overlaid with an array of bright colours making it the ideal representation of the indie-pop artist’s lively personality and style.

The footage was captured by 2 x ARIA nominated director Liam Kelly, who is widely respected for his work on a number of Tones and I’s videos, and joined by Los Ángeles based director and video artist Stevie Be who jumped on board to add another dimension to the clip, using his analog video art, he created a 90s inspired aesthetic filled with eye-catching, psychedelic effects.

Matilda talks about her excitement on seeing the directors bring her world to life, “It was such an amazing process creating the video for ‘Linger’. Liam Kelly came on really early and was the mastermind behind directing all the visuals alongside Anthony Littlechild (director of photography). It was such a fun two days of filming and I think that fun really shows in the final product. It was so cool to then see this analogue, retro-disco world grow as Stevie brought his magical effects to the video. Building on my mad, colourful, underwater disco world, I wanted to create a bit of mystery, so that people watch, want more and get keen for what’s to come. I’m so excited how Stevie, Liam and Anthony were able to give life to that.”

The disco inspired single, ‘Linger’ has been quick to spark the interest of local tastemaker outlets – Life Without Andy, Pilerats and Thomas Bleach as well as receiving the full support of triple j Unearthed and a number of triple j presenters. After entering ‘Your Touch’ into triple j’s Unearthed High competition, Matilda garnered attention from an array of triple j presenters as well as former Unearthed High winner George Alice. With her charismatic and bright personality emphatically shining through her music, Matilda’s unique slice of indie-pop cements the young artist as one of the inspiring up and comers in the scene. 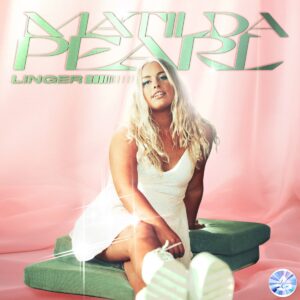 The official music video for ‘Linger’ is out now.