Winifred reveals her second single of 2021, “Drowning Purple,” a magnetic track featuring angelic melodies and futuristic soundscapes. Winifred is creating a world of her own, coining a unique style with deeply moving production and a voice that is purely other-worldly.

Townsville based Winifred is putting her own bold and fearless spin on modern pop. Influenced by artists like FKA Twigs, BANKS, Kučka, and Joji she is navigating her own path in the music space as an alt-pop artist with an emphasis on sound design production and shimmery, hook-centric vocals. Following her first release of 2021 “Into the Night”, Winifred is returning to make herself known in her moody new track “Drowning Purple.”

“When I wrote Drowning Purple, I put two words together that sparked a visualisation and a mood. ‘Drowning’ and ‘Purple’, for some reason those two words seemed to hit on a feeling and so I delved into it,” said Winifred. “I think Drowning Purple has melodramatic qualities, ie, ’I’m Drowning Purple for you, can you hear me calling your name’  but I also feel there’s a strong sense of romance as the song develops, not necessarily reflecting real life, maybe more of a fantasy or a daydream.”

The beginning of 2021 saw Winifred’s first release since her debut “Into the Night”, which premiered on The Music and received praise from Women In Pop, Milky, Amnplify, and AuspOp. “Into the Night” was added to Guardian Australia‘s best new tracks Spotify playlist and was spun on triple j’s Home and Hosed. Alongside the track, Winifred released a visually-stunning dance music video for “Into the Night” which was added to MTV playlist additions.

Amidst her notable achievements in 2020 Winifred was the co-writer for  “In My Mind” with Alice Ivy, featuring Ecca Vandal which was featured in a global Apple ‘Shot on iPhone’ ad campaign in August, rose to #1 on the U.S. Shazam Discovery Chart, added to high rotation on triple j among others successes. 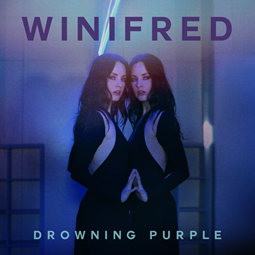 “Drowning Purple” is available to stream on all platforms now.