Different Kinds of Light is a collection of songs recorded in the iconic RCA Studios by powerhouse producer Dave Cobb (John Prine, Lady Gaga). Teasing the album, Jade has recently released singles “Now Is The Time,” “Houdini,” and “Open up the heavens.”

At the back end of 2020 Jade shared her brilliant singles “Headstart” and “Houdini,” followed by the BBC Radio 1 play-listed single “Open up the heavens” and the live EP RCA Studio A Sessions, taken from her live stream show from the iconic studios earlier this year which once again showcased her natural talent, uncompromising sense of self and enviable musicianship to the world.

Jade also played a sold out, socially-distanced tour in America and turned in a brilliant performance of “Headstart” for The Tonight Show Starring Jimmy Fallon (HERE). More recently, Jade released her acclaimed track “Now Is The Time”, which was quickly snapped up as Annie Mac’s Hottest Record In The World, is a testament to Jade’s maturity and evolution with her songwriting; Jade’s storytelling ability is unmatched. “If I had a penny for all your potential, I’d be left drowning in my mouth full of metal,” Jade sings on “Now is the Time.”

Jade’s new single, “Candidate” is described by NME as, “a ferocious track which sees her deftly skewer chauvinism with some heavy shredding and Janis Joplin-esque hollering: ‘Every man takes me for a fool’”.

In Jade’s own words, “When I sing songs like ‘Candidate’ I feel like I’m singing for my friends and the things they tell me they can’t say.” Jade has always been a very vocal feminist and activist for women’s rights – working with the Tori Amos-affiliated RAINN, American’s largest anti-sexual-assault non-profit, and playing a show in Texas for the volunteer-run empower Her, which supports young girls who have lost their mothers.

Speaking further on the track, Jade says; “Candidate is about the fury I feel when I hear my friends stories of hardships they’ve faced because of their gender or disposition. I’m tired of people being walked over, talked over and generally taken advantage of, and that’s the song.”

Jade’s sophomore album is heavily influenced by the legendary RCA Studios in Nashville (Dolly Parton, Elvis, Willie Nelson) and the North American americana/alt-rock music scene as that’s where Jade majoritively recorded Different Kinds of Light with powerhouse producer Dave Cobb (John Prine, Lady Gaga). Over the last 2 years, Jade has organically become part of a community of American songwriters and artists, and the likes of Jason Isbell, Sheryl Crow and Jade’s friend and collaborator, Brandi Carlile have all taken the British voice firmly under their wing.

Jade Bird’s self-titled debut album was received with much critical acclaim when it was released in 2019. Even as a first offering from the then 21 year old, the album helped set the bar for female musicianship in the current age, carried along by Jades mature and sharply observed narrative vignettes of relationships, divorce and everything in between.

With this new album, Jade has grown, she’s travelled the world, collected stories, met fascinating new people, fathomed her own emotions and settled in Austin amongst a new and empowering musical family. This journey has helped her see love and relationships in a new light from her teenage self growing up in the UK.

On the record Jade says, “Different Kinds of Light at its most basic is about falling in love and at its most complex, the chaos of trying to get away from your past. I’ve written about fictional characters, about myself and people who don’t exist or at least only exist in my mind, memory and imagination. This record started in Japan, a small getaway from a busy year.

We took it to Mexico, to Nashville and to upstate New York adding pieces of songs along the way until it became the different phases of who I am, what my relationship is and what my relationship to other people has become. It’s been a big exploration through evenings and mornings spent under strange skies. With Different Kinds of Light came different kinds of clarity in my life.”

In the studio with Dave Cobb, the two let Jade’s sound find its groove, joining tough 90s alt-rock and the melodicism of Blur and Oasis at their sweetest to the taut rattle of Iggy Pop’s “The Passenger.” “That rock element that I’ve been missing and deeply love,” is how Jade describes it. “If I’m in the car, that’s what I put on.” There’s also the spirit of Fleetwood Mac’s pop epics. Stevie Nicks’ “Storms” inspired Different Kinds of Light’s title track, written in summer 2019 while Jade toured the US with Jason Isbell and Father John Misty. “It says so much: ‘did not deal with the road’, ‘I have always been a storm’. There’s so much in that record that breaks my whole being,” she says, melting.

Jade Bird remains one of the UK’s most individual and exciting female voices out there. With Different Kinds of Light we find her cool, calm and collected – confidently striding ahead into her sure-to-be enthralling next chapter of her life and music. 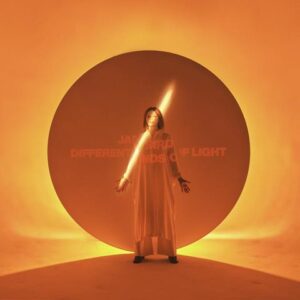 “Different Kinds Of Light” is available on all platforms now.