TAKEN FROM THE NEW ALBUM
‘SELF CARE’
OUT SEPTEMBER 18

Yours Truly have lifted another taste off their highly-anticipated upcoming record ‘Self Care’ today, in the form of new single and video ‘Undersize’.

Where the rest of Self Care largely looks inward at Mikaila conquering her own personal struggles, ‘Undersize’ finds the vocalist looking on at a friend going through battles of their own.

“This song is really a letter to a close friend of mine,” she explains. “While watching them navigating their life through all the ups, downs and obstacles life throws at them, I wrote this just to let them know that I’m here for them through all of that.”

CLICK BELOW TO WATCH THE MUSIC VIDEO FOR ‘UNDERSIZE’

The release follows a monumental few weeks for the four-piece, who upon announcing details of their record ‘Self Care’, were revealed as the newest addition to Select Agency’s huge roster of clients, as well as the latest hand picked guest for triple j’s famed Like A Version segment. The band took on a huge cover of Oasis’ classic ‘Don’t Look Back In Anger’ and performed their own single and album track ‘Composure’ to a groundswell of praise.

Now considered one of Australia’s fastest rising alternative/pop-punk acts, Yours Truly burst out of the local Sydney scene in 2017 with their debut EP ‘Too Late For Apologies’, followed by the breakout track ‘High Hopes‘, now sitting on a sweltering 11 million lifetime streams and climbing.

In April 2019 the four-piece released their follow up EP ‘Afterglow‘ to a tidal wave of success, from festival appearances at the likes of Download UK, Riot Fest, Slam Dunk & Sad Summer and continued radio support from stations including triple j, Kerrang! Radio, BBC R1, Sirius XM Emo Project and idobi.

Self Care unravels the momentous year 2019 was for the band personally and professionally, and the means for reflection and coping that writing their debut album was for them.

Yours Truly are due to tour their new album as soon as restrictions allow. Sign up to the band’s mailing list to be the first to know when! 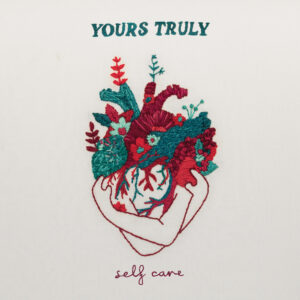