To be someone with a Wild heart means to be passionate, strong in conviction and have a willingness to stick the course and see it through. South-East Queensland-based hardcore act Wildheartexemplify this conviction, this passionate dedication to telling stories of truth and unearthing injustice through their music.

They reveal the fruits of their labour, the announcement of their debut album, Global Crisis. And if their words on the record seem angry, it’s because they are. The record contains 13 incendiary tracks – passionate, furious and raw – recorded, mixed and mastered by Gareth Hargreaves.

Global Crisis will be released on Friday 5th November, through Collision Course and MGM Distribution – and will be available through all digital platforms, which can be pre-ordered/pre-saved digitally at http://ffm.to/globalcrisis. Vinyl and Merch bundles can be pre-ordered at https://www.wearewildheart.com.au/store.

Along with the announcement of this new album, comes introspective, but no less raging new single ‘Show Me What It’s Like to Be Worthless.’ From Yugambeh man Axel Best, frontman for Wildheart, the new single is “…one of the more melodic songs we have written and is probably one of the darkest taken from the upcoming album. There has been an insane amount of uncertainty over the past few years with everything that has happened both locally and internationally – and we wanted to tap into something lyrically dark, but moving, with this song.”

Blunt Mag said: “For the hardcore hellions in Queensland outfit Wildheart, the sky really is the limit. Not only are they set to tear shit up at next year’s monolithic UNIFY Gathering, but they’re set to do so with a whole album of intensely ferocious mosh anthems.”

Though there have been a few tastes of Global Crisis already released – singles Rising Tide, Backburner and False Hope, Fake Happiness are already out in the world, there are still 9 new tracks to dive into. Shaun Allen from Gold Coast band Nerve Damage featured on ‘Rising Tide’, the iconic speech from Bruce Shillingsworth’s Q&A appearance featured at the start of ‘Backburner’ and still to come is a feature vocal spot from Danielle O’Grady from Brisbane band All Hours features on ‘The Long Slow Whisper’.

On the live front, Wildheart are performing at October 2021’s Halloween Hysteria alongside Spiderbait, King Parrot and Mammal and were recently announced as one of the performers confirmed on the UNIFY FOREVER (2022) line-up, alongside The Amity Affliction, Violent Soho, Alpha Wolf and more!

Wildheart’s history is storied and impressive. They have performed at BIGSOUND 2018 and the Mountain Goat Valley Crawl and has seen regular playtime across various well known platforms such as triple j (having been played on triple j lunch, Short. Fast. Loud, The Racket and Home and Hosed, as well as multiple songs added to rotation on triple j unearthed!) and Spotify’s ‘Homegrown and Heavy’ playlist; and have played alongside heavyweight acts including Casey (UK), Listener (US), The Brave, Deez Nuts, Belle Haven, Bare Bones, Young Lions, Deadlights, and Dregg; and hitting the road on several independent East Coast tours.

Wildheart’s Global Crisis album will be available from Friday November 5 through all digital platforms, which can be pre-ordered/pre-saved digitally at http://ffm.to/global-crisis. Vinyl and Merch bundles can be pre-ordered at https://www.wearewildheart.com.au/store. New Single ‘Show Me What It’s Like to Be Worthless‘ is out now. 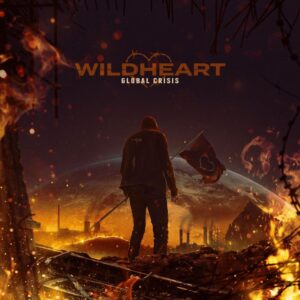