Rising queer pop star Mike Taveira returns with his new single, “Sex for Breakfast (ft. Allie X),” from his forthcoming debut EP, ‘Cut Velvet.’ Due out in early 2022, ‘Cut Velvet’ is a glittering record of spacey 80s new-wave and rudimentary 70s synths balanced precariously over slap bass and funk grooves. It’s a conceptual record that chronicles Mike’s wide-eyed move to Los Angeles, the rise and fall of young love, and all the predators along the way.

“Sex For Breakfast” is the second single to be released from ‘Cut Velvet,’ following the lead single, “Switch,” which was released earlier this summer. Featuring indie-pop superstar Allie X, “Sex for Breakfast” is a synth-fueled anthem packed with suggestive lyrical wordplay and beats that will get you moving.

“’Sex for Breakfast’ was one of those lightning-in-a-bottle songs,” Mike says of the new song. “The idea came to me after an intense morning with this guy I was head over heels for. We were essentially dating but kept pretending it was a fling. We ended up in this almost masochistic cat-and-mouse game, knowing we were so right together but both being too uncomfortable to admit it.”

Los Angeles-based Mike Taveira makes music that is wild, fun, and unabashedly queer. He showcases an infectious pop sensibility while tackling the complexities and vulnerability of sexual identity, love, gender and sex. Since making his artist debut in 2019, Mike has received praise from tastemakers like Billboard Pride, Gay Times, PRIDE, and Attitude. With an underlying message that preaches to be true to yourself, whoever you love, whatever you identity as, and whatever life throws your way, Mike is a vibrant force in the evolution of queer pop.

Listen to “Sex for Breakfast (ft. Allie X)” on all streaming platforms: https://ffm.to/sfbax 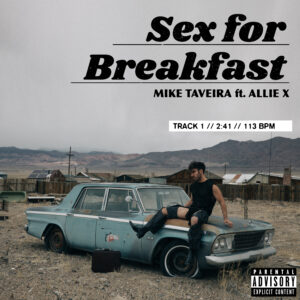