The wait is finally over! The release of SPIRITBOX’s ‘Eternal Blue’, one of the mostly hotly anticipated debut albums in recent years, is upon us.

The release rolls in on a tsunami of critical acclaim and perfect score reviews with Metal Injectionstating “Eternal Blue will be remembered as a game changer, the kind of total reset of the rulebook we saw in Slipknot’s debut” in their 10/10 review, Kerrang! Magazine calling it the ‘debut of the year’ in their 5/5 review, Outburn Magazine calling it “a modern metal masterpiece” in their 10/10 review and Metal Hammer hailing ‘Eternal Blue’ as a “staggeringly brilliant record that resoundingly delivers on the hype” in their 4.5/5 review. Find Eternal Blue on all streaming platforms here and stream the video playlist on YouTube here.

SPIRITBOX – one of the hottest new bands in heavy music, thrilled fans back in May with the official announcement of their long awaited debut album, ‘Eternal Blue’. The band sold out of all vinyl pre-orders within the first 24 hours of announcement and on- sale.

Five songs have been released from the album prior to today. First came the unrelentingly brutal “Holy Roller” in September 2020. It debuted at #25 on Billboard’s Hot Hard Rock Songs and charted as the #1 song of 2020 on SiriusXM’s Liquid Metal.

Next came the album announcement along with new track “Circle With Me” which charted on Billboard at #1 Hard Rock Digital Song Sales, #5 Hot Hard Rock Songs, #9 Rock Songs Core Genre, #12 Rock Digital Songs, #50 Hot Rock & Alternative Songs, #71 Digital Songs. “Secret Garden” followed and most recently, “Hurt You”. Between them, they have clocked up a staggering 53 million streams across streaming platforms to date.

Spiritbox’s ‘Eternal Blue’ is out now – with all details, streaming, digital and merch bundles here.

What Aussie Media Are Saying about ‘Eternal Blue’

“Eternal Blue is a stunning record, the kind that artists spend their whole lives trying to create. The fact they’ve hit these heights on their debut is mind-blowing.” – 10/10 – Hysteria Mag

“You may find yourself wiping away tears when you reach the end of Eternal Blue, but that’s because Spiritbox have crafted this incredible album that connects with the listener on an emotional level and takes them on a journey of self-discovery, empathy and overcoming.” – Wall of Sound

“From lurching instrumentals to swirling warmth and austerity, there’s a staggering weight behind everything the Spiritbox light touches. Ultimately offering a bewitching lesson in duality and impetuous beauty, Eternal Blue is a true and exciting journey that will keep you guessing right until the end, stealing and ultimately healing your heart under the guise of an alt metal album.” – TheMusic.com.au

“‘Eternal Blue’ is a colossal statement showcasing the tonal and genre fluidity that this band expertly wields. Spiritbox have existed for a couple of years, with killer EPs and singles under their belts already, yet ‘Eternal Blue’ is like a new beginning for the Canadian group. They’re only just getting started.” – killyourstereo.com

“Eternal Blue is a record greater than any one track, one riff, one melody. It feels entirely purposeful, fleshed out, with no holds barred and nothing left unsaid… It is beautifully crafted, nuanced, and subtle, a body of work that deserves a front to back listen – many times over.” – Heavy Mag
SPIRITBOXCourtney LaPlante – Vocals | Mike Stringer – Guitar | Bill Crook – Bassist 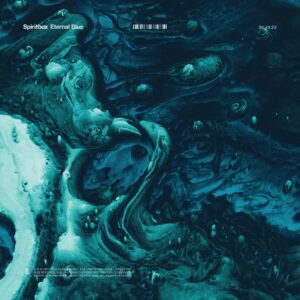