American music duo Twenty-One Pilots graced Rod Laver Arena in Melbourne on Thursday 13th December with an electric rock powerhouse show. Showcasing their Grammy award winning fifth album ‘Trench’ Twenty One Pilots are a 2 piece hailing from Columbus Ohio, Tyler Joseph on lead vocals and drummer extraordinaire, Josh Dunn. The 15 thousand seater stadium was packed with a mix of long-time to fresh new fans, even some young primary school age children being accompanied by their parents (great to see the parents getting in early introducing their kids to good rockin music)

They kick off the night with the explosive ‘Jumpsuit’ – a killer track and guitar riff to start the set! The stage is set up with a car on fire, similar to the film clip, with flames intermittently shooting up from the floor. Josh comes out with a flame torch wearing a khaki green top with a huge yellow cross, similar to the one he wears in the film clip. His face covered with the iconic mask, like he’s preparing to go into battle! While Tyler has his face completely covered in a ski mask. 2 huge LCD screens are on each side with wicked yellow lighting to help distinguish the ‘Trench‘ album as well as another huge screen behind them made up of huge square blocks, which light up constantly, flickering between images and flashing lights. A visual feast for your senses! 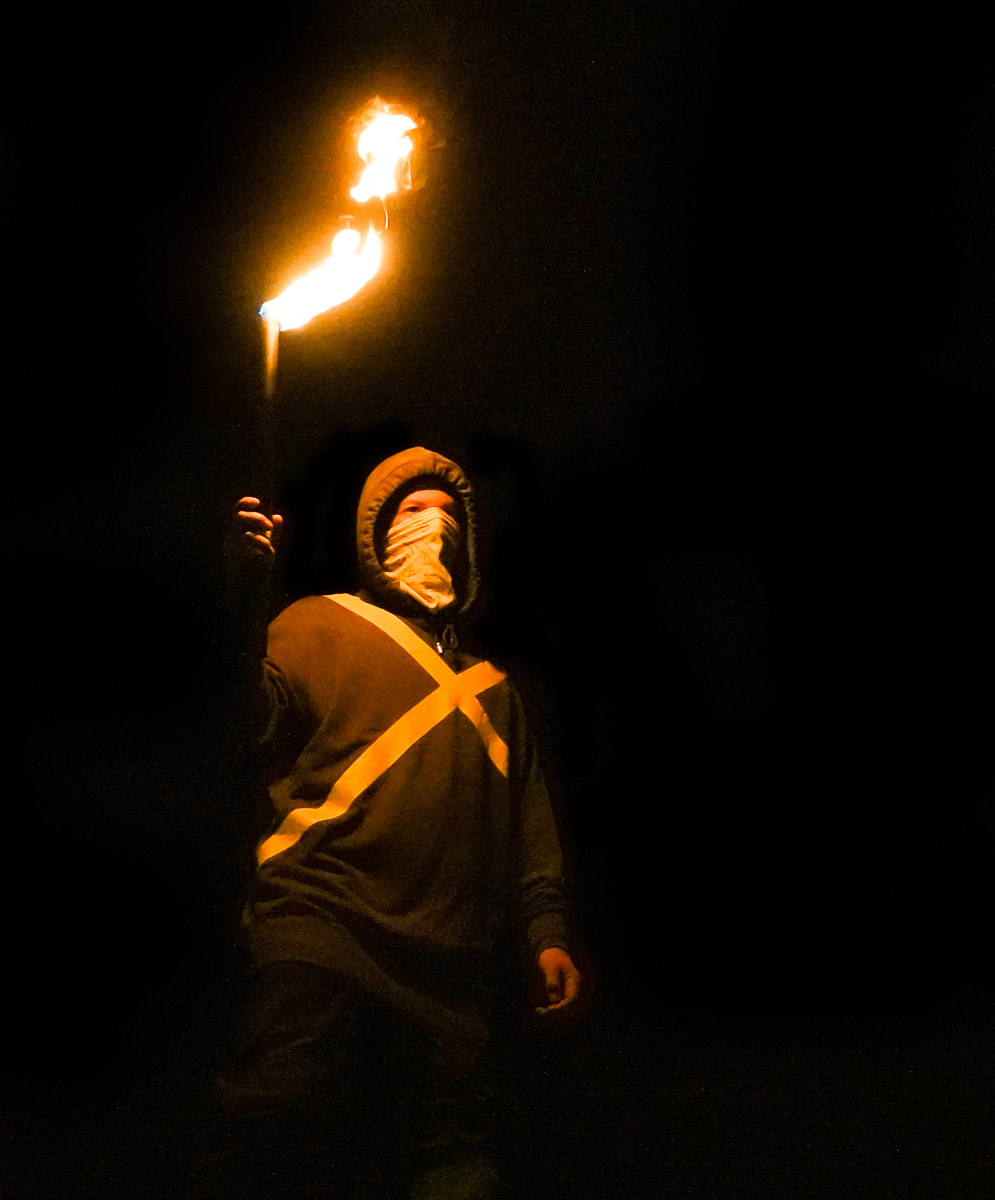 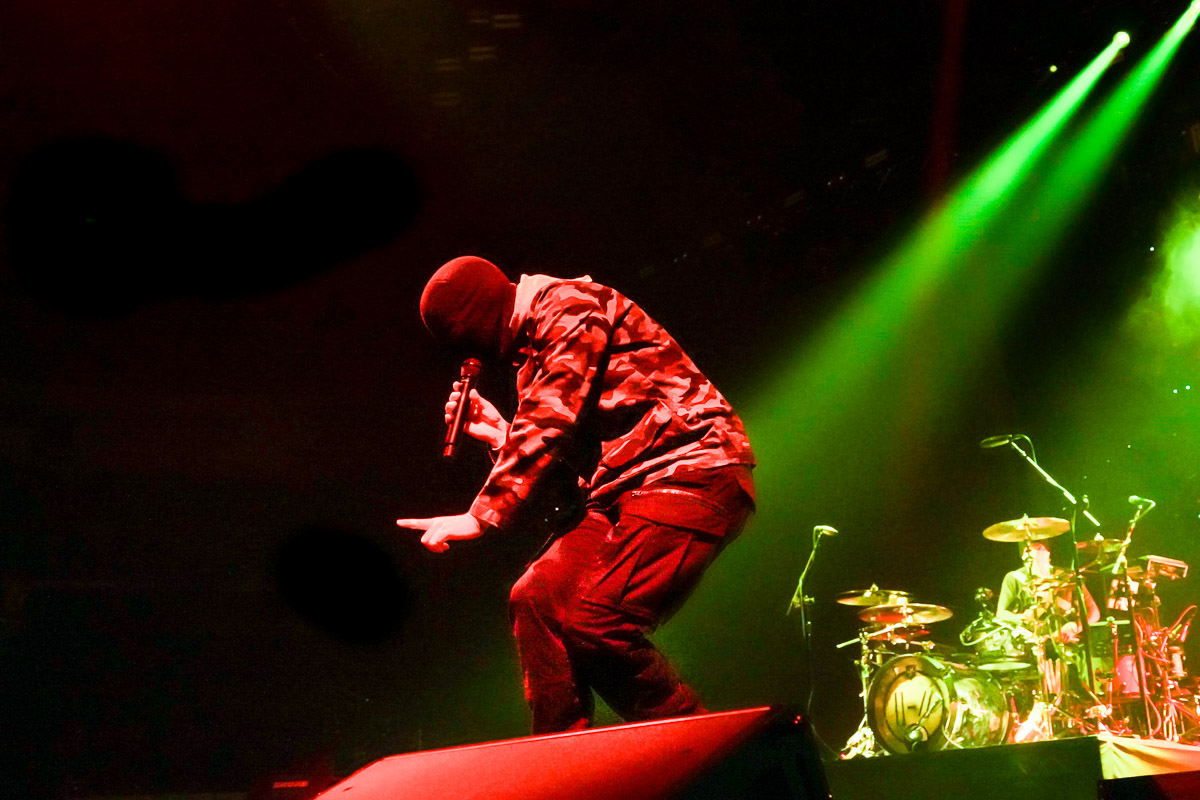 There was a moment during the third song ‘Fairly Local’ where, one moment Joseph is sitting at the piano with a blanket draped over him, and then he disappears! We thought it was the end of the song, or maybe another costume change? …But..no! he re-appears on the other side of the arena in the crowd. Everyone goes berserk! Especially those lucky enough to be sitting in that area. Ski mask still intact, he finishes off the song from that spot. We thought it couldn’t be him under the mask as he was sitting at the piano only a few seconds earlier, until he rips it off at the end of the song to reveal himself!! The roar that greets his unveiling was deafening!

Next up we have hip hop inspired ‘Levitate’ from ‘Trench’ which makes you feel you’re listening to a blend of Eminem and Mike Skinner from English alt/hip hop band ‘The Streets.’ They played a broad coverage of tracks from all their albums; ‘Trench’ ‘Blurry Face’ ‘Vessel,’ ‘TopxMM’ and of course their 2009 self-titled debut. They even include ‘Heathens’ from ‘Suicide Squad’ soundtrack, which cleverly had the stage coloured green and purple, with the crowd drenched in red. Great visuals! Looked and sounded incredible!!

The duo are so fascinating to watch, they are so talented with Joseph constantly darting around the stage with boundless energy and Josh’s riveting drumming, quite eye catching! He gets the biggest cheer of the night when the roadies bring out a 2 metre square board with a drum kit attached, which they get the audience at the front of the stage to hold above their heads. Josh climbs on top and stands topless, staring out balancing on the board before launching into a mind boggling drum solo! Another highlight was Joseph’s impromptu cover of Elvis Presley’s ‘Can’t Help Falling in Love,’ a tour debut with the whole crowd beautifully singing along!! 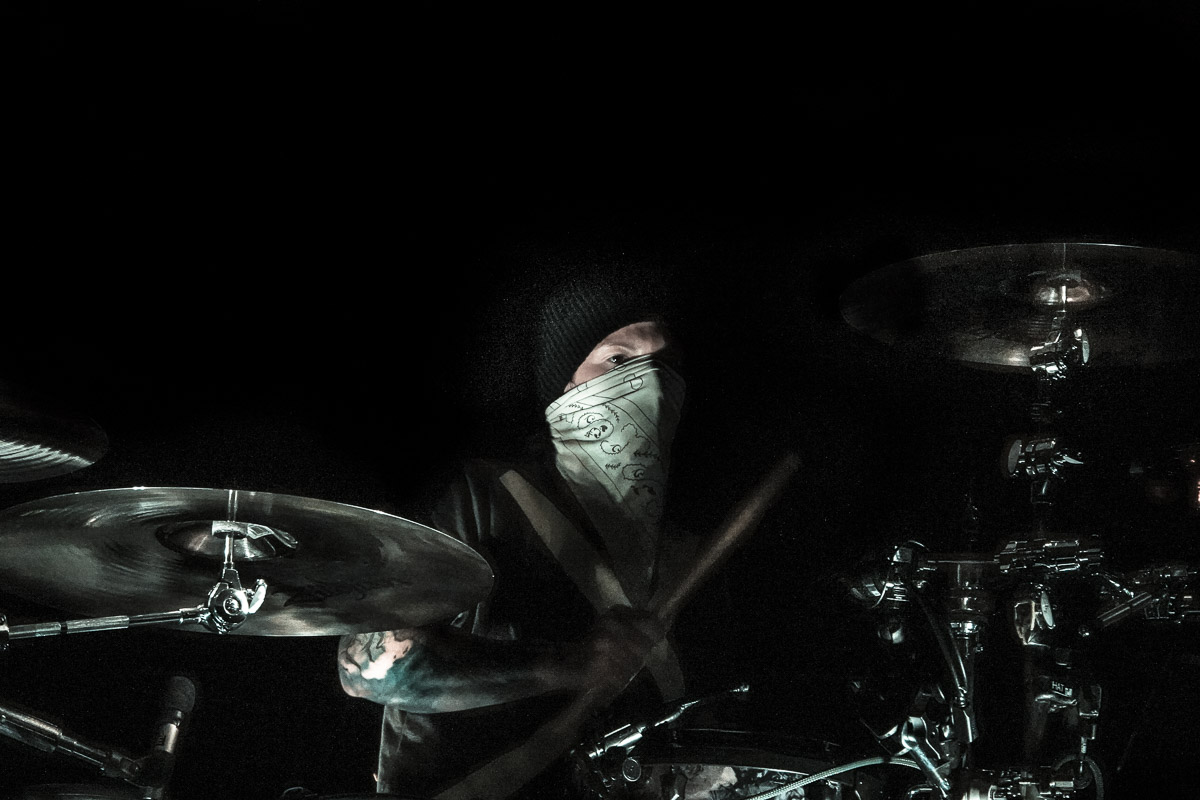 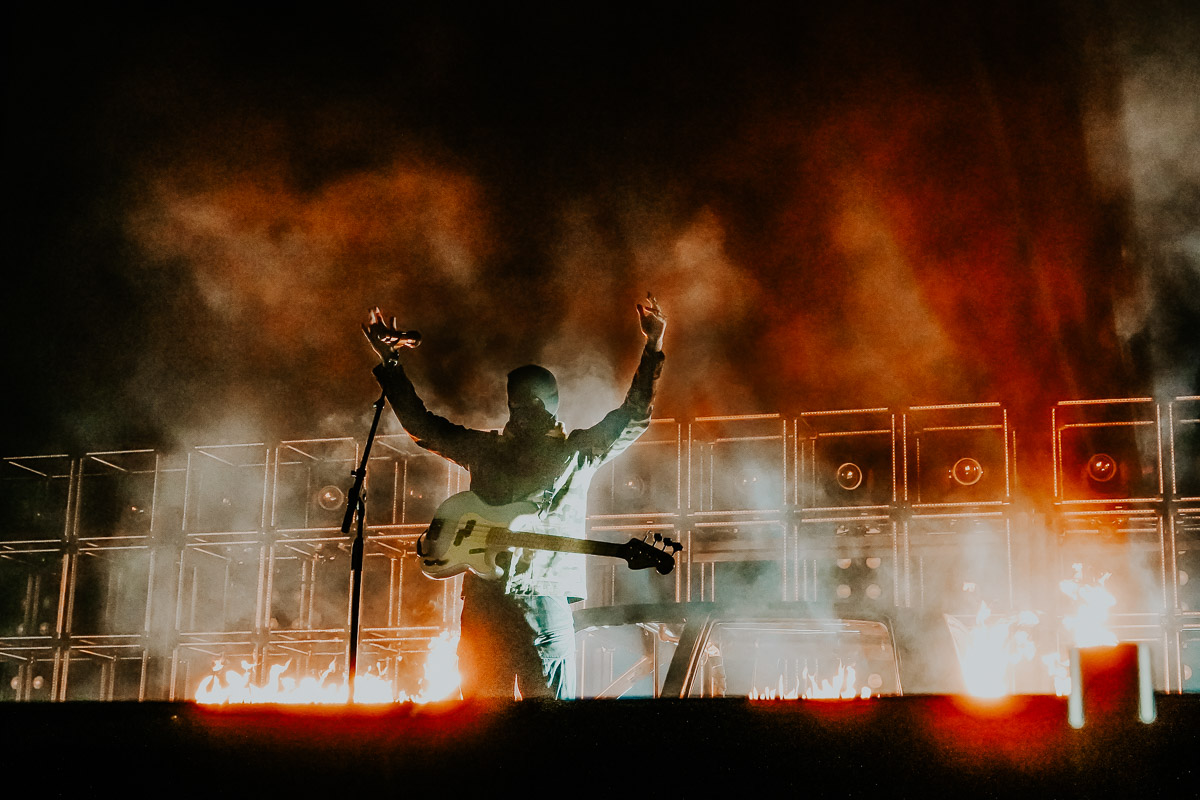 ‘Nico And The Niners ’ was a crowd pleaser with ‘Taxi Cab’ a flashback from their debut. Stopping time with ‘Pet Cheetah’ which flowed into ‘Holding on to you’ they know how to raise the levels of rock and hip hop. Constantly in and out of various costumes, they unleash ‘My Blood’ dressed in skeleton jumpsuits, which has become a recent trade mark with lots of copycat skeleton jumpsuits in the crowd. They played the track to perfection and included the crowd in a chorus medley. Very powerful!! The variety of tracks they put in the set list is a great introduction to the duo if you weren’t familiar with their music.

Ending the night with ‘Leave This City’ and old school favourite ‘Trees’ from ‘Vessel’ a track they have been closing shows with ever since its release. The show was an artistic visual master class, the night filled with pyrotechnics and confetti, it had all the ingredients of a spectacular night which will live long in the memory of everyone lucky enough to see it. This two piece are getting better by the year, an amazing show that ran through your blood and bleed your ears.

Listen to your heart and your ears and listen to Twenty One Pilots. “It aint the speakers that bump hearts, it’s our hearts that make the beat!”