Fresh from wrapping up their 10 year anniversary tour, DZs have wasted no time getting back into what they do best: serving up head-banging party anthems! As gritty as it is punchy, ‘IN-TO-IT’ sees DZ take a bite into sprechgesang (AKA spoken singing) and it’s delicious. Parsons’ rough vocals narrate the punter living for the weekend, shredding light on Aussie society’s relationship with alcohol and the impact liquor has when used as a coping mechanism.

‘IN-TO-IT’ marks the first taste of DZs’ upcoming fourth studio album Positive Rising: Part 1. The now three-piece, with DZ officially initiating long-term live guitarist Lachlan Ewbankinto the group, have also just signed with Alcopop for the release of the album in the UK and Europe.

Positive Rising: Part 1 was written over 2 weeks in LA and will feature Matt Caughthran of The Bronx and Kirsty Tickle of Exhibitionist, as well as a song co-written with Kim Moyesof The Presets. Produced and mixed by Miro Mackie (St Vincent, Cold War Kids, WAAX) the new record still features DZs’ signature hard-hitting riffs, but this time they explore new territory. They’re still heading to the house party, but this time they’re taking the scenic route!

2018 was a huge year for the band, with their third LP Bloody Lovely debuting at #4 on the ARIA charts & earning them their third ARIA nomination for Best Rock/Heavy Metal Album. Earlier in 2019, DZ Deathrays released a long-awaited hip-hop collab with Australian heavyweights Trials and Briggs and young prodigy Jesswar in ‘Front Row Hustle’.

Not looking to slow down any time soon, DZ are back and ready to take listeners on a one-way trip to destination intoxication! Positive Rising: Part 1 is available for pre-order everywhere now. 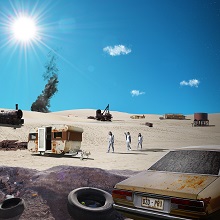