Ahead of the festive season, Ivy League Records is extremely proud to release ‘Fashionably Late (Every New Year’s Day)’, a collaboration between one of the country’s most exciting up-and-coming artists Shannen James and Australian rock icon, Paul Dempsey. Inspired by the classic feel of 80s festive-ballads, whilst also timeless in amongst the holiday playlists, the new single chronicles the feeling of waiting for your crush to arrive by the New Year’s countdown. Full of romance that sets you right in the scene, ‘Fashionably Late (Every New Year’s Day)’ is a stunning and nostalgic ode to the classics.

Accompanying the single is the video starring both Shannen and Paul and directed by Shannen and her friend and frequent collaborator Ellena Paskevicius from Ellena Louise Films, bringing the story to life a amid a glistening disco ball. Watch the video below.

Shannen James:“Being able to work with Paul Dempsey on this song was such a pleasure. He has one of my favourite voices in Australian music and for him to want to join me on this song was a huge honour. He brought a different character and energy to the song but still shared the same perspective of someone waiting for their crush to walk through the door at any moment and make all their dreams come true. Did they turn up and sweep you off your feet, or were you left being the only one to be dancing alone? It’s beautiful and heartbreaking at the same time.”

Paul Dempsey says of the collab:“I was an instant Shannen James fan the first time I heard ‘Superstitious’ on triple J and upon further investigation I was amazed at the depth and consistent high-quality of her output. We played some shows together, became friends and it’s been heaps of fun to collaborate on a song together. ‘Fashionably Late’ reminds me of classic 80’s holiday-themed ballads which I freely admit to being a complete sucker for.”

Shannen James will return to the stage next Thu 2 Dec for a headline show at the Corner Hotel in Melbourne, following her debut (and sold out) East Coast tour earlier in the year. ‘Fashionably Late (Every New Year’s Day)’ follows Shannen’s 2021 singles, ‘Separate Ways’ and ‘Superstitious’, which received heavy support across triple j, Spotify, Apple Music & peaking at #22 on the US Submodern Singles Chart. ‘Superstitious’ followed Shannen’s breakthrough 2020 EP Arrows, which included hits such as the bright title track ‘Arrows’,  ‘Collide’, her 2019 debut, ‘Something In The Water’, and ‘Empty Eyes’, and led to collaborations with The Rubens, festivals SXSW & Bigsound, and sharing stages with the likes of Men I Trust, G Flip & more. 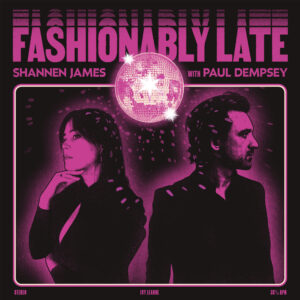