“I didn’t want to have any smooth edges” Russell Morris says of his brand newBloodlines album Black And Blue Heart, which is released today. “Pop songs were the last thing I wanted.”

Producers Nick DiDia and Bernard Fanning had assembled a cracking studio band at their Byron Bay studio, and the musicians had only been given the songs the week before but they were told not to do too much work. “They came into the studio, we’d play them once, twice or three times, and that was it” adds Russell.

And it’s that raw energy that commands your attention on Black And Blue Heart. From the ragged count-in of album opener ‘Ain’t No Angel’, slammed down with splashy drums, overdriven Hammond organ and vintage vocal echo, to the sinuous, conspiratorial whisper of ‘Is There Anybody Out There?’, this extraordinary album begins to climb yet another peak for one of our all-time greatest singer-songwriters.

“I’ve got two passions: history and astrophysics,” Russell says. “’Is There Anybody Out There’ is totally out there; not like out in my backyard, but out in the universe. It’s questioning how much life is out there in the great beyond and wondering … ‘are you going to contact me?’” Co-written with Split Enz’s Eddie Rayner maybe 15 years ago, it’s the only song that wasn’t fresh off Russell’s pen.

A lifelong observer of human experience, he found inspiration in art and life, past and present. A classic gangster film informed the tragicomic character portrait of ‘Witness Protection’. ‘Fat Man And The Priest’ came from a conversation with a mate “about people who sit in moral judgement of other people.” The office drone in ‘Asleep At The Wheel’ may have come from distant, monotonous memories of working the mail desk for the Kiss Army in Los Angeles back in the mid ‘70s, he says with a laugh.

“I think the song that’s had the most emotional connections with people is ‘Forever Remembered’. It’s about missing people close to me who I’ve lost; friends like Jim Keays and Darryl Cotton and [rock photographer] Ros O’Gorman. They’re all in there.”

Then there’s the title cut, a song of simmering tenderness and empathy, that Bernard Fanning describes as “a song for the ages. Russell’s been a really substantial artist for a very long time but I think that song will live on with his best,” he says.

In support of Black And Blue Heart, Russell will be heading out on the road throughout the year. Following a coveted spot at Byron Bay Bluesfest, Russell will treat audiences around the country to some headline shows, supported by special guest Ash Grunwald. 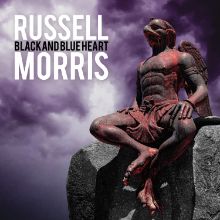 Black And Blue Heart tracklist:
1. Ain’t No Angel
2. Is There Anybody Out There?
3. Sitting Pretty
4. Black And Blue Heart
5. See You Go
6. Full Moon
7. Not My Lucky Day
8. Fat Man And The Priest
9. Asleep At The Wheel
10. Witness Protection
11. Forever Remembered