Adelaide four-piece touring with ODETTE through May

It’s a great time to be a Pinkish Blu fan, with the indie outfit from Adelaide not only announcing brand new music in single ‘Backward’, but a slew of live shows kicking off this March.

Pinkish Blu have been keeping busy with music even during COVID, releasing their debut EP there’s no such thing as good people in May, further courting praise for singles ‘Red Hot Moon’ and ‘Calm Down’. The release of this material served as the perfect foundation to bring them to a brand new year of creative opportunities. Along with a much-anticipated headline show in Adelaide in March, Pinkish Blu are hitting the road with Odette, playing venues in Queensland this May.

With their new track, the band dug deeper than before when it came to pulling off authentic, emotion-driving songwriting; resulting in their strongest release yet.

‘Backward’ is a track that has been part of the Pinkish Blu catalogue – in demo form, anyway – for some time, with the band revisiting the track last year. Its final form here brings feelings of nostalgia and a bittersweet melancholy together, wrapped up and presented with Pinkish Blu’s now-trademark alt-pop bent.

Though the single has changed a lot from its original form, the band stands strongly behind ‘Backward’ noting it’s the most emotional and honest they’ve opened themselves up to being on record to date.

“During COVID we felt nostalgic and were looking back on our old demos and found ‘Backward’, actually, four different versions of ‘Backward’. From what it was back then to what it is now is vastly different, but the core idea of the song has remained prevalent throughout. …Sonically we’ve evolved to a sound we’re really comfortable with, which has given us the opportunity to be more open and wear our hearts on our sleeve.” Pinkish Blu, Brice Young

For its music video, Pinkish Blu brought ‘Backward’ to the movies, filming performance footage at the Gawler Cinemas. Thinking about the idea of the process of reflection like scenes playing out during a film, the band pulled this central idea together with influences like Twin Peaks and Donnie Darko to produce the final cut.

“Reflecting on something you may have just gone through or went through a long time ago…when you reflect on things that hold strong emotional value, these moments can play out in your head like scenes from a movie. We hit up our local small town cinema and managed to convince them to let us film a music video there for a whole day.” Pinkish Blu, Ricky Lidell

Having supported the likes of The Rubens, Trophy Eyes and more, as well as performing on lucrative stages including BIGSOUND and Groovin The Moo in the last few years alone, Pinkish Blu have steadily become one of South Australia’s most promising acts. 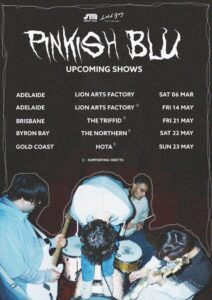