In what is her first release in six years, the pioneering and genre-defining musician returns with a track which showcases her stand-out and memorable flow across an infectious, reggae-tinged framework.  Adopting a syncopated beat, the catchy melody lets Eve’s intelligent lyricism take centre stage whilst Konshens perfectly complements the track with his vocal. A sure-fire way to re-engage her core fans whilst opening her up to the next generation, ‘Reload’ is the first of more collaborative new music to come.

Having exploded into the music scene in the late 90s, Grammy-award winner Eve was one of a fresh breed of tough, talented and commercially viable female MCs to carve their name within the male-dominated rap scene. Now nearly 20 years since the seminal Let There Be Eve… Ruff Ryders’ First Lady, Eve has accrued an impressive and undeniable hit list (‘Let Me Blow Ya Mind’, ‘Gangsta Lovin’’, ‘Who’s That Girl’, and ‘Tambourine’) which has seen her become a widely celebrated artist across the globe.

Forward-thinking, game-changing, and independently minded, Eve is every inch the icon. Having moved to London over 5 years ago, Eve has found herself and the music she is making inspired by the UK scene. With a new project due for release, expect the unexpected as Eve looks set to prove herself as an artist who defines a generation. 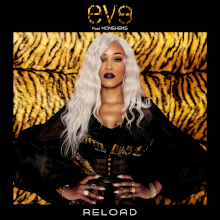 Out now through Liberator Music/
On Pawns Inc