Singer-songwriter Luke Daniel Peacock is following up his #2 AMRAP charting hit “Older Then” with an energetic and punchy new single, “Give Me A Reason”. Steeped in 80’s and 90’s indie-pop influence, the driving synth melody of the track is offset by Peacock’s husky and powerful vocal performance.

Drawing on the influence of artists like New Order, The Cure, Animal Collective and Chvrches, the track represents a new sonic direction for Peacock, born of experimentation and nostalgia.

LISTEN TO “GIVE ME A REASON” HERE 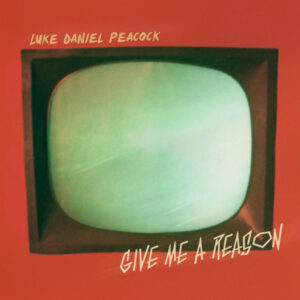 “A benefit of forced isolation was that I could go back and enjoy production styles and techniques that I was playing with as a teenager in my bedroom – using drum machines and sounds that weren’t restrained to a traditional band format,” said Luke Daniel Peacock. “This song explores the emotions surrounding a person or people asking when enough is enough. It uses the analogy of an unbalanced personal relationship to examine deeper and broader forms of suffering, patience and self-worth.”

Luke Daniel Peacock’s previous solo efforts have earned him extensive acclaim across the music industry, including being awarded The Billy Thorpe Scholarship Award in 2016 for his LP “We’ve Come A Long Way Darling”.

Simultaneously, Luke has recorded, performed and toured across the world with some of the most revered and respected names in Australian and international music. Luke also featured as a performer and curator of the 13th Isol-aid Festival, and his most recent single “Older Then” shot to #2 on the AMRAP Metro charts.

Luke Daniel Peacock was born and grew up in Brisbane, QLD, Australia. He is a descendant of the Meriam people of the eastern Torres Strait Islands, and also has strong Scottish heritage; he credits both of these lineages to his deep attraction to song and melody. Through it’s pearling industry and transient population, the Torres Strait is a famous melting pot of culture and music, while Scotland is home to many of Luke’s favourite pop-heavy bands, including The Jesus and Mary Chain, Cocteau Twins, Teenage Fanclub, Chvrches, The Waterboys and Frightened Rabbit.

Luke Daniel Peacock is one artist to keep your eyes on!