“Murph Murphy’s solo project is straight from the art” – METRO

Following the release of his second EP Five Songs to Briefly Fill the Void in March, Matthew “Murph” Murphy – guitarist and lead singer of platinum-selling indie heroes The Wombats – today announces details of ‘Wherever I Go, I Want To Leave’, the debut album from his collaborative solo project Love Fame Tragedy, due for release 10th July via Good Soldier Songs/AWAL. Fans can pre-save the album HERE.

A new single, ‘5150’, is also released today. Named after the code used in California law to protect individuals who present a danger to themselves, the track reflects on the temptations of escaping from responsibility. True to form, Murph uses the song as a tongue in cheek confessional, inspired by his own personal life as a father and husband. The song comes accompanied by a fittingly restless animated video from previous collaborator Jamie Mac.

Speaking about the track Murph explains: ‘5150 refers to the California law code for individuals who present a danger to themselves or others due to signs of mental illness. In this case it refers more to how I occasionally feel a need to escape, regardless of the repercussions”

Named after a revered Pablo Picasso exhibition at the Tate Modern, Love Fame Tragedy’s previous two EPs I Don’t Want To Play The Victim, But I’m Really Good At It (September 2019) and Five Songs To Briefly Fill The Void (March 2020) have garnered widespread support from the likes of triple j, Zane Lowe, Annie Mac, NME, The Times, CLASH, Metro, Jack Saunders, Radio X and more, racking up over 13 million global streams in the process. Murph has recently finished a full UK tour, which saw him play headline dates across Birmingham, Bristol, and London.

Having flown unhindered into the world since its announcement a year ago, Love Fame Tragedy is Murph at his most personal and creatively receptive, making ‘Wherever I Go, I Want To Leave’ a gloriously uninhibited collection of synth-pop confessionals where hedonism, responsibility, anxiety and the fragility of love all collide. 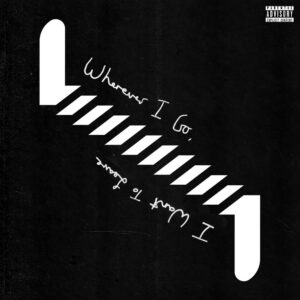 LOVE FAME TRAGEDY ‘WHEREVER I GO, I WANT TO LEAVE’