“Shacks & Palaces sounds like if MGMT were actually made up of Modest Mouse’s Isaac Brock and The New Pornographers’ A. C. Newman. Aherne utilizes a slightly off-kilter cadence on the verses, reaching high for a hook of pure indie pop bliss as the synths finally take over for the chorus.” – Consequence of Sound
The Temper Trap’s Jonny Aherne has released the second single from his new solo project Shacks & Palaces on Liberation Records. The timely tune — ‘Alone Together’ — comes accompanied with an eccentric music video shot during quarantine with Brooklyn artists Amanda and Steve Carmona.

“We were all needing to do something creative. There were a ton of moving pieces and a lot of thought required to navigate them, but Amanda and Steve managed to make it work with just the three of us in the room. I love what they made,” Jonny says of the experience.

The upbeat track was premiered by Consequence of Sound, with Jonny telling them:

“I wrote this song before COVID-19 hit, but now the title ‘Alone Together’ belongs to everyone… It’s about the distance we find in the company of even our loved ones.” Writing the song was both challenging and cathartic for Jonny, who considers its subject matter rather vulnerable. He says, “I suppose I was allowing my shadow self to appear, display faults, foregoing the made-up appearance.”

VIDEO: ‘Alone Together’ by Shacks & Palaces

The Australian-born, Brooklyn-based artist creates buoyant, folk-informed indie pop, sparkling with likenesses to eclectic icons from Modest Mouse to Beach Boys, Dr. Dog to Hamilton Leithauser. The music ranges from infectious to truly exultant, a blissful blend of bouncing melodies, boomerang hooks and colourful production. Aherne’s voice —  a jubilant, stony sort of roar — is recognisable from his contributions to the mid-aughts sensation, but here rings absolutely reckless with spirit. 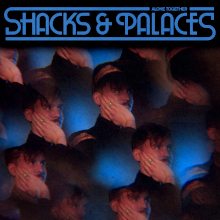