Making viewers through a Tarantino-inspired story reminiscent of movies like Blow and Wolf of Wall Street and everyone’s favourite video game GTA Vice City, the music video showcases Mitchel Cave, Clinton Cave and Christian Anthony in their most creative roles to date.

Inspired by the ‘fast life’ aesthetic of events which took place between the early eighties to late nineties, OHMAMI was directed and edited by Chase Atlantic themselves, further cementing their dedication and desire to be involved in every step of the creative process.

The track, released earlier this summer, has gained its place at the top of TikTok and streaming charts alike, with over 24 Million streams worldwide and 27.7K uses on the viral social media platform. Forever pushing boundaries and constantly failing to be placed in a box, Chase Atlantic propelled themselves forward again with this Spanish-influence track that ties in pop sensibilities and a heart-pounding breakdown.

“It’s the type of song that allows you to really feel yourself, to actually feel alive,” the band says. “Yet, at the same time, it provides an escape from reality. Even if it’s just momentarily, you can feel the effect of the song lingering in the brain like audible drugs.”

Chase Atlantic is continuing their ascent into the music and pop culture stratosphere. They recently covered Alternative Press and Rock Sound and have garnered critical acclaim from Ones to Watch, Billboard and Pop Dust. The trio has reached a monumental 7.1M monthly listeners on Spotify and continues to garner hundreds of thousands of views on TikTok.

The band has toured in over 15 countries, selling out venues such as Webster Hall in New York, Kentish Town Forum in the UK and The Regent Theater in Los Angeles, in addition to gracing the stages of high-profile festivals such as Bonnaroo, Lollapalooza and Reading and Leeds.

Chase Atlantic’s Fearless Records debut BEAUTY IN DEATH, which landed at No. 2 on the Alternative New Artist Chart, is out now. The band has accumulated over half-a-billion domestic streams across all platforms, including 68 million for BEAUTY IN DEATH. 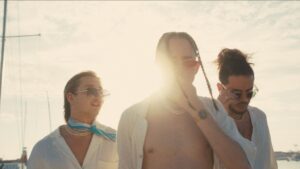