LAVRENCE REVEALS ENTRANCING NEW TRACK “ALL IN MY HEAD”

Sydney-based artist Lavrence has just released his latest track “All In My Head”, his second track of 2020. Incredibly catchy and wonderfully dizzying, this tune is perfect for losing yourself to a cheeky dance in your room (until it’s safe to get back onto the dance floor again!) and getting lost in the trance of Lavrence’s silky vocals.

“‘All in My Head’ Is a meditation on resistance and surrender.” said Lavrence. “The song invites you to withdraw from the noise around you and turn your focus inward to find your truth. I wrote this song after coming out of a long period of depression and anxiety, through a lot of self-work, and was finally feeling free enough to shape my identity without the fear of judgement holding me back.

Self-doubt used to paralyze me until I stopped seeking external validation and started focusing on my own joy, opinions and guidance. Once I let go of needing to “prove” myself to others –things quickly started falling into place.This song is a call to liberate yourself from the perceptions and expectations of the outside world.

The song started taking on a more political undertone for me when I performed it at a charity event to raise money for the RFS during the devastating bushfires earlier this year. The song seemed to fit the call to action regarding climate change. The message in this song has only grown more prevalent for me throughout 2020 with important movements such as Black Lives Matter and the rise in class consciousness. More than ever, we’re being called to think for ourselves, seek truth and create change.”

Posing the question “Why exist quietly when your true self is just waiting to shine,” Sydney  singer-songwriter Lavrence  is ecstatic to share the universe that he has lovingly created. He has received praise from Triple J’s Dave Ruby Howe, Declan Byrne and Gemma Pike, and he is currently working with Sydney DJ/producer Bobby Gray to create his renowned bold and brilliant sound.

An incredible debut performance at Heaps Gay’s The Haus Of Acrylic party at Sydney’s The Imperial Hotel in 2018 has led Lavrence to become one of Australia’s rising artists to watch; this year has seen the release of fabulous should-be club banger “Nightshade,” with more tracks to come.

“All In My Head” is available to stream on all platforms now.

“This is pop at its absolute best; purposeful, strong, stylistic and more so than anything, empowering.” – Purple Sneakers

“a glittery, 80s-tinged ode to empowerment on a single that’ll make you feel comfortable and warm if you so need it.” – Pilerats

“Discovering LAVRENCE was like discovering a part of ourselves we were too intimidated to approach, yet when we did, it became incredibly obvious that this was exactly what we’d been missing.” – The Eye Creative 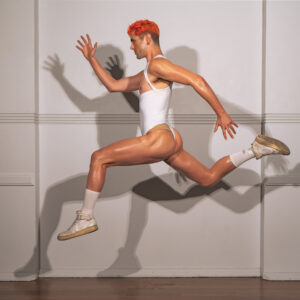