TEAM UP ON NEW TRACK,

Grammy-nominated Sydney trio Mansionair have teamed up with Germany’s NoMBe for cathartic new track ‘Guillotine’, which landed last Friday with an accompanying lyric video. The track is the band’s first single release since the launch of their acclaimed debut album Shadowboxer early last year.

Mansionair and NoMBe first met on Sirius XM Alt Nation’s Advanced Placement Tour in 2018, where they quickly hit it off and planned to collaborate. But life intervened and they were both kept busy on subsequent tours. Then 2020 hit, finally affording them with the time they needed to create music together.

Jack Froggatt from Mansionair elaborates, “Guillotine speaks to all those thoughts that endlessly pile up in your brain, it’s a tongue-in-cheek response to those feelings – wanting to switch off your mind to the noise. With such a heavy year almost gone it’s a track to hopefully lighten the mood, shake off the pressure and carry on. After touring with NoMBe back in 2018 we had the thought of a collab on the back-burner… with all this time to write this year we finally found some space to do it.”

In addition to providing time for the artists to collaborate, 2020 also gave the inspiration for the song. Noah McBeth, aka NoMBe, explains, “Guillotine is about feeling overwhelmed with it all…sort of like ‘I feel my head is about to explode so might as well just chop it off’… it’s been such a crazy year on top of the pressures of releasing music right now and I think Mansionair and I funnelled all of that into this track.”

Mansionair released their debut album Shadowboxer in March 2019. The album was written and self-produced by the band, the culmination of a journey that started with a viral hit single and led to high profile collaborations, including a Grammy-nomination for their single with Odesza ‘Line of Sight’, Billboard charting singles, gold ARIA accreditations and several major support tours (CHVRCHES, Florence & The Machine, Bob Moses, SiriusXM Advanced Placement co-headline).

Noah McBeth, or NoMBe, was born and raised in Heidelberg, Germany. His debut LP They Might’ve Even Loved Me released in 2018, has garnered almost 300 million streams to date. The album was praised for its unique blend of old school rock and electronic influences, with NME declaring it “a brilliant glimpse of a talent who can make magic in just about any territory.” The first single off his 2020 follow up album CHROMATOPIA was named a contender for one of the “biggest songs” of the year by Rolling Stone.

Together, this talented partnership has created magic on ‘Guillotine’. 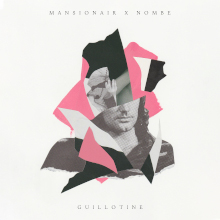