DRAWING YOU INTO THEIR

Head boppin’, booty shaking & full of smiles, Queensland’s LAURA MAC has burst into the limelight with their debut single ‘Garage Full of Dreams’. A brazen, shameless and unrivaled energy carries this bop from their garage in the Sunshine Coast Hinterland, all the way to Lush Studios (The Butterfly Effect, Semantics, Katie Noonan) in Brisbane, harnessing the energy and desire of LAURA MAC. Let ‘Garage Full of Dreams’ grab your hand, spin you around and leave you breathless for more.

With a joint desire to create fun, tongue-in-cheek tracks that refuse to conform to genres, partners Laura Maclachlan & Zac Connely set out to do just that! Having met on a clear evening at Splendour In The Grass the couple fell in love, moved to the hinterlands and began writing music together.

Led by Laura Maclachlan’s kooky and energetic perspective on life, their debut single carries infectious grooves and catchy melodies throughout the entire track.

“You know how some people have to work really hard for things that other people have given to them for free? That’s kind of what this song is about. That and cool cars! I sing about all these cool cars when in reality I drive the world’s most beat up Toyota Camry. When I got the car it was rancid and had 5000 cockroaches in it. It’s clean now but has subsequently been nicknamed ‘The Roach.’”

The duo didn’t have to achieve their vision alone either. After hearing the initial demos late one night, Ian Peres (Wolfmother) & Luke Williams (Dead Letter Circus) came together to contribute to the instrumentation, providing a star-studded and powerful backing for Laura Maclachlan to shine atop of. Zac Connely provided guitar and bass, having cut his teeth in his own band Rival Fire, biding his time until their next show with the legendary KISS.

The ‘Garage Full of Dreams’, written in a big red party bus, was really starting to sparkle.

“We write all of our music in our big red party bus. I throw in the occasional bass line but Zac writes all the music and then I put vocals down over the top. The initial recording is usually just me scat singing over the track to get the melody right and then writing the words and filling in the gaps as we’re recording the demo.”

‘Garage Full of Dreams’ is out now. Official  single artwork below 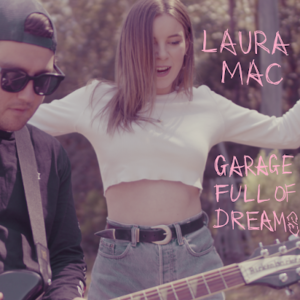 Not to be overshadowed though, that “big red party bus” became the star in the music video for ‘Garage Full of Dreams’ – providing a venue, bar & stage all wrapped in one to support the upbeat energy matching the bouncy track. Directed by multi-award winning videographer Dan Macarthur (Powderfinger, Killing Heidi, Regurgitator) the video captures the band at their wildest and most care-free.

Depicting the band partying and performing around their home in the Sunshine Coast Hinterland, there’s even a bright red sports car to accent their “lavish” lifestyle (a little red Honda – “very reliable with a high safety rating in an affordable price range”

“Having a heap of our mates involved in the film clip was rad and we had a big party that night to celebrate. We ended up so drunk by the end of the day and I only fell off the back of the motorbike once haha! I hope you all get a kick out of the film clip because we sure did.”

With an infectious brashness and cheeky nature, it’s no doubt that LAURA MAC are poised to storm Australian music, crash tackle the industry and demand the spotlight. A debut EP is just around the corner and will continue the band’s rapid trajectory from party bus to sold-out shows in no time.