Australia’s nomad Kim Churchilll’s latest EP “The End” is set for release today, following the two single reveals  “Nothing Nothing” and “Outta Love” which were lifted from the EP. Recorded in the Blue Mountains earlier in the year “The End” holds a six song collection of pure folk goodness.

LISTEN TO “THE END” HERE

“The End” is the third piece of Churchill’s 4-part EP collection, proceeding from the first chapter “I Am” (recorded in Berlin, Germany) and second part of the series “Forgetting” (recorded on Vancouver Island, Canada). Kim continues with the unique release of a four part series with “The End” (recorded in the Blue Mountains, Australia).

“The End is the third instalment from my 4-part EP series and marks a very cathartic moment in its trajectory,” says Kim, “The songs were inspired by a moment of cataclysmic change in my life and for some odd reason I felt really drawn to the sheer cliffs and ridges of the Blue Mountains to bring those heart stopping feelings into reality. We recorded and wrote a lot of the music on the edge of ravines looking down too far away towns and valleys. Then, unexpectedly, it all kind of gently bloomed into existence in this wonderful studio in the rainforest that gave me a beautiful sense of calm and perspective to record within.”

The first track off the EP is “The Summer” which wanders down the lyrical path of accepting the throes of life and the way in which cycles must end. With a high energy backbeat, this song marks perhaps the closest Kim has ever gone to a ‘full band’ style production.

‘It was nice to play in a full band situation actually. I very very rarely do that and it was a fantastic release,” says Kim, “The song, though dealing with the way all in which we love can fade in the bright sun of life, also has a cathartic quality. Sometimes we must take responsibility for life abruptly and shocking changes and something in the band feel allowed me to express this cathartic mood.”

The second song from the EP “Outta Love” which was released early October has been well received. “Outta Love” is Kim coming into a difficult decision where he must choose to end a relationship. Talking on the song Kim said “I was terrified to write this song actually. It was so hard to admit these truths to myself”.

“Nothing Nothing” released as a single in August, is a song with best friend and artistic collaborator Ben Gumbleton (Boo Seeka).“Nothing Nothing” has scored national radio recognition with triple j and was performed as a part of Like A Version. The song deals with the ongoing movement of touring artists and the liberation they often feel at constantly travelling from place to place. the travel asks an artist to remain open and free to the ever changing environments around them and the effect and inspiration that can draw.

In the midst of the EP is the track “Like You Now” dives into a dreamy pop sound scape and Kim tackles his desire to come down from the intensities of a relationship he can see must end.

“It was a particularly deep and intense relationship that led me to this song.” Said Churchill, “I could see I needed to come back to earth and end things and I was so hell bent on finding a respectful way to go through the process. I dreamed of the idea of friendship. I knew it would take years to be honest, but it’s been important for me to envision and I feel, nearly two years later, that friendship finally blooming from the ashes.”

“Stormy” holds a darker, more tragic message. Written  in a rickety old house on a hill on the night of a storm, the song represents a moment of understanding for Kim.

“I lived in this old weatherboard house at the time so when storms came by it was really intense. I just felt the song was delivered by the storm almost. It connected me with a truth I had been trying to run from.”

Closing the EP with track “Nothing Left To Say” that is driven by strong ukulele, Kim singing melodies and the support of a string quartet. The lack of words brings about a pure sense of the emotion in which Kim is feeling – “The End” of something big.

“I always thought I would write lyrics to it, but eventually I realised there really were no words. It was the seed of The End. A time when no words could offer a way forward. A time to be reflective. Emotive and expressive, but not to fill with words and labels.“

At 29 years of age, Kim Churchill has achieved incredible things as a professional musician. In late 2017 – Kim released his album “Weight_Falls”, which debuted at #6 on the ARIA charts, and featured hits “Second Hand Car” and “Breakneck Speed”. 2020 has seen Kim release a collection of four EP’s titled “I Am Forgetting The End Again”, which each EP having been recorded in a different part of the world, with a different producer. Kim has released “I Am” (recorded in Berlin) and “Forgetting” (recorded in Canada) and toured internationally across Canada, Europe, South Africa, and the United States.

Recognised as much internationally as he is in Australia, Churchill has performed headline shows, festivals and supports alike all over the planet, with notable performances include Glastonbury, Splendour in the Grass, Falls Festival, Montreal Jazz, Telluride Blues, and supports slots with Milky Chance, Billy Bragg, Michael Franti, and The Medicine People.

“The End” EP is available on all platforms now. 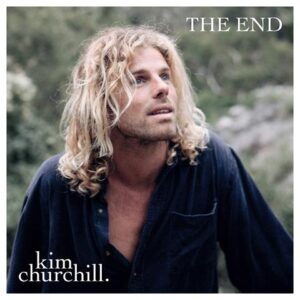