Following a return home to Australia in 2018, a string of sold-out theatre tours and his most recent acting and writing role which dramatically bore fruit in the acclaimed Sky Atlantic / Foxtel 2019 series Upright, Minchin has spent the best part of the past two years pouring his considerable artistic energy into a globally anticipated studio album.

LISTEN TO “APART TOGETHER” HERE

Out today via BMG, ApartTogether is a rich suite of disarmingly honest story-songs written with Minchin’s inimitable wistfulness and whimsy. Although best known for his politically-charged punchlines and hit musicals, past indie favourites like Not Perfect and White Wine in the Sun, as well as the recent Missy Higgins release of his heartbreaking ballad, CarryYou, have hinted at Minchin’s breadth as a singer-songwriter. Apart Together is masterfully produced and co-orchestrated by Daniel Denholm, giving it a rare cohesiveness that lends itself to the lost art of listening to an album in a single sitting.

Minchin has said, “I had no idea what this record was going to be about, and – having written for many years in many styles and with many different political, comedic and theatrical motives – the experience of just writing what I was feeling seemed pretty scary!  But I’m very happy with the record we’ve made. It reflects my obsession with time, words, and with finding the beauty in the harsh realities of our lives. It is sometimes sad and sometimes grand and often whimsical and every now and then, though I try to resist it, pretty silly.”

The album includes six previously unreleased tracks, alongside a raft of 2020 singles; “Leaving LA” – a lyrical hybrid of pop and rock exploring the harshness and two-dimensionality of Hollywood; ballads “I’ll Take Lonely Tonight” and “The Absence of You” – gracefully addressing wavering moments of faithfulness and fidelity; “Airport Piano” – a funky tribute to a midlife crisis; and the album’s stunning title track “Apart Together” about the brutal beauty of love as we age.

To celebrate the release, last night all 11 songs from the new record were performed in an extraordinary streaming concert from Sydney’s iconic Trackdown Studios. The first live experience of Tim’s first official solo release featured an extraordinary and expanded band and string section plus a very special guest spot from one of Minchin’s heroes Ben Folds. It is available to stream now until 7pm November 21 via: https://shops.ticketmasterpartners.com/tim-minchin-live-stream

The show also nominated Support Act as its designated charity to celebrate Ausmusic T-Shirt Day during the stream. To donate go to: ausmusictshirtday.org.au

After some 20 years in the entertainment industry, Tim has enjoyed continued worldwide success as a composer-lyricist, actor, writer, director and comedian. But this 55 minute record from Australia’s very own rock n roll nerd is a stark reminder that Minchin remains first and foremost a gifted and distinctive singer-songwriter.

“Apart Together” is available for purchase and stream on all platforms now. 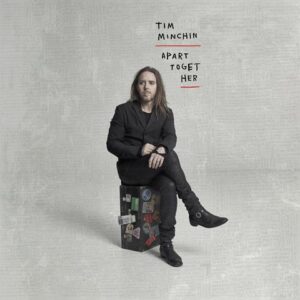