The record is the perfect snapshot of one of Australia’s most exciting new bands, operating at full force. Layered with rich tone, emotional depth and a knack for storytelling that feels years beyond their time together as a group, Early Trauma depicts Johnny Hunter at the peak of their creative strengths, leaving the listener wanting to know what’s coming next. “As young adults our talent was unparalleled in wasting opportunities with blissful ignorance. From those decisions stemmed Early Trauma. Each song on this EP is in some way an ode to wasted youth. The energy and time spent on unimportant moments, and the realisation that without those moments we would not be who we are today. It’s our way of reverse engineering the painful memories we carry from our past decisions, so we can grow, develop and with time ultimately heal those scars.” Johnny Hunter

The EP has been teased here and there with the release of ‘Try As You May’, and ‘Pain & Joy’ alongside the more recent ‘Hollow Man’, diving deep into emotive territory listeners can liken to genre pioneers including Joy Division and The Smiths, and Australian contemporaries in Kirin J Callinan, City Calm Down and Liars. Lead single ‘Innocence’ serves as an example of the EP’s broader energy. Unafraid to play with darker sonic tones, Early Trauma mixes drama with rich storytelling.  “An ode to Winona Ryder in the 1988 movie, Heathers. The film is about a high school couple who murder their classmates; an absolute hyperbolic example of wasted youth. We wrote the song as though we were writing for the closing credits of the movie. A true ballad for Early Trauma.” Johnny Hunter

Hypnotic vocals weave around post-punk production that has been effortlessly brought together to serve each of the five tracks’ narrative. What sticks out about the songs on the Early Trauma EP is that they each can stand proudly on their own while also being able to connect together as part of a larger story.

Recorded in Sydney’s southwest at A Sharp Recording Studio with ARIA-winning producer Adrian Breakspear (Gang of Youths), and mastered by Ben Feggans (Cut Copy) of Studios 301, Early Trauma as a final product is refined, beautifully produced and delivered with the essence of the band going untouched. “Written in a dimly lit studio/bedroom in an old townhouse in Redfern on an unplugged Gretsch and a borrowed Microkorg in between work weeks and late nights. Lyrics and parts were bounced off one another on top of the mattress that lay upon the floor of the room. Forever trapped in a futile battle with cockroaches we finalized the songs in Sydenham and recorded them at A Sharp Studios with our producer Adrian Breakspear, who is always on the pursuit for perfection.” Johnny Hunter 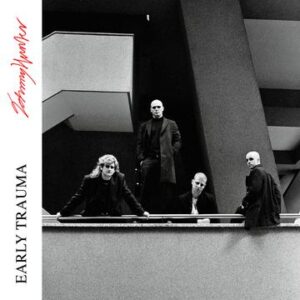