Singer/songwriter Dave Webb steps out with his new solo single, The World Stopped Turinin’ playing in multiple bands over the last decade, Webb proves his personal capabilities on the wailing pop-rock track.

Featuring the polished sounds of a seasoned performer Dave Webb brings a live energy to his latest single, the fast paced rock number features layered wailing strings, blended elements of electronica and anthemic, passionate vocals inspired by greats such as 30 Seconds to Mars and Santa Cruz.

People want to sing, dance, and have a good time. I wrote this hook for people to latch onto, coupling it with a solid beat that inspires the body to move. I fill my creative streak by layering guitars and having fun intricate guitar parts, as well as layering vocals and harmonies. – David Webb

The World Stopped Turnin’ was written about Webb’s experiences in 2020, specifically during lockdown when the entire world felt at a standstill. For the artist this year saw a standstill in his music career however it did not extinguish his passion for writing, instead of defeatism Webb found inspiration in 2020 and continued to write.

The World Stopped Turnin’ is a personal reflection of 2020, including my own perspective shift as well as musical influences. My music is aimed to inspire both emotionally and to energize, whether it be a life altering shift, or as simple as a happy positive escape in the moment. – David Webb

Previously touring and performing as part of multiple bands, Dave Webb has graced the stages of Inland Sea of Sound Festival (2018) as well as securing a slot supporting Aloe Blacc in Dublin as part of a Guinness Competition (2010). Webb is currently in the process of putting together a band to bring his new, dynamic sound to the stage while also frequently performing covers as a soloist.

The World Stopped Turnin’ is out now. Official single artwork below 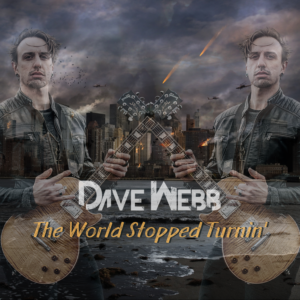