Melbourne’s CLOWNS continue to revel in what’s been a powerful return, following up the release of May’s ‘Does It Matter?’ with the energetic new track ‘Sarah’.

As fans anticipate the band’s return to stages around the country throughout the second half of 2021, Clowns are making sure that the appetite for their new sounds is more than satisfied.

With ‘Sarah’, the band flexes at a fun and engaging creative peak; from the pacing of the arrangement, the crashing percussion, driving melodies and gritty vocals, Clowns lean all the way into the serotonin the track is focused on.

“…the usage becomes informal, the big highs become the normal…”

Exploring the idea of how love can be the most addictive emotion of them all, ‘Sarah’ sees Clowns ride the rollercoaster of falling in love, figuring it out and struggling with its grip. Recording with acclaimed producer Woody Annison (The Living End, Screamfeeder) at Melbourne’s Red Door Studios, the band thrived in the studio as they brought new influences together with the punk rock prowess that has endeared them to fans everywhere since the band’s infancy.

The track, a co-write with Matt Squire (Panic! At The Disco, One Direction), is vivid and bright, without losing any of the punch that has dictated Clowns material of the past.

“I’ve never met a Sarah that I haven’t liked. It’s a great name which seems to breed excellent qualities in people. That being said, the Sarah we are referring to metaphorically in this song is the hormone serotonin, and oh boy, is our Facebook relationship status ‘it’s complicated’.”

“Our new song ‘Sarah’ explores the idea of how love can be like a drug. Dizzying highs and soul destroying lows. It can elevate your life to heights you never knew were possible but can at the same time be life crushingly addictive. We all love Sarah, don’t we? But what happens when she goes away? Why does she go away so often? How come we are so smitten in her presence and yet so surprised when leaves, especially after a life long history of this ambivalent behaviour? It’s love and lacklustre for all of us with love and Sarah.” Clowns, Stevie Williams

“The new video clip for our song Sarah rocks so hard that it was made it illegal in many countries. Watch at own risk!”
CLOWNS

Clowns reaped much praise with the release of ‘Does It Matter?’ back in May. Not just a shining return to form, but a vibrant indication of where the band was heading next, the single was the perfect way to kick off their next chapter.

“‘Sarah’ digs into the experience of falling in love, and much like the emotion itself, it’s one wild rollercoaster ride.”
Hysteria

“This might be my fave clowns song – it’s a heap of fun and had me craving jumping up and down at a festival again pls and thank you.”
Triple J, Declan Byrne (‘Does It Matter?’, 2021)

“Indignation never sounded like such a party! Whether they’re dealing with broken strings at the gig, twisted ankles in the bowl or a flawed socioeconomic system Clowns have the best time going at it with full speed.”
Triple J Unearthed, Dave Ruby Howe (‘Does It Matter?’, 2021)

“Their last album was a monster of an album and if this song is anything to go by, the next one should be a blinder.”
Wall Of Sound

“Clowns solidify the notion that they are not to be a band to be confined by genre boundaries.”
Heavy Magazine

“The perfect example of what hard work and a handy dose of wit can do if you stick to your guns.”
The Age

“What pretty much started as Australia’s answer to The Bronx back in 2010, has since evolved into one of Down Under’s most adventurous exports…”
Punk Rock Theory 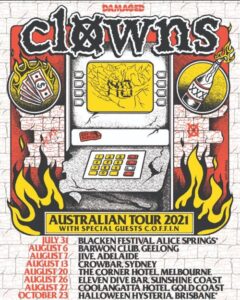 CLOWNS ‘DOES IT MATTER?’ TOUR DATES