Rising singer/songwriter Dominic Breen announces an east coast run of shows in support of his new single ‘James Street Tonight’, complete with five piece band and with more dates still to be announced.

The last week has been a busy one for Breen, guesting with Middle Kids for their appearance on ‘The Late Late Show with James Corden’ and unveiling a stirring new video for ‘James Street Tonight’ (premiered by The Music). The song has rocketed up The Music Network’s national Community Radio Monitor chart, moving from #31 to #6 this week.

The new video was co-directed by Joel Ludemann and Breen himself. Shot in Sydney, it features cameos from other great artists including FRITZ, Georgia Mulligan and Ultracrush.

Co-director Joel Ludemann says “The aim of the clip was to create a simple visual contrast between a lonely feeling of roaming the streets at night and the warmth and connection available on the inside. The latter was intended to be less realistic, and more of what those on the outside imagine the inside to feel like.”

Eagle-eyed viewers will spot easter eggs that connect the clip to earlier Breen videos. The beginning of the new clip links with the end of his previous video for ‘Lovelost’, while the party dancing scenes feature a nod to the ‘light suit’ worn by Richard Roxburgh in Breen’s acclaimed video for ‘Lay Low’.

‘James Street Tonight’ is another step towards his debut album, recorded in Sydney over the past six months with Middle Kids’ member and production impresario Tim Fitz at the helm. Dominic’s album is currently in the final stages of production, with more new tracks to be released in the first half of this year. A title and release date will be announced shortly. ‘James Street Tonight’ has been lauded by Australian media with 4-5 star reviews and radio additions on Triple j’s Unearthed, Double j and FBi Radio Sydney. 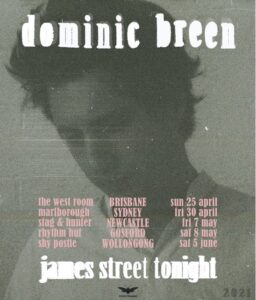 James Street Tonight: “Had this one well and truly planted in the head ever since first playing it. Tim Fitz’s production and pedal steel adds a great flavour. Dominic’s dozy Dylanesque delivery has such a classic feel about it too. Add a dose of longing on top of those melodies and you’ve cooked up one great song.”  4.5 stars

James Street Tonight: “Dominic always has such a way with words, space and emotion. He’s got stories to tell and you believe every single word. thanks for this treat!” 4.5 stars

James Street Tonight: “What a gorgeous lilt, and then you bring in the slide guitar. A dream.” 4 stars

“His is a name that has become synonymous with forward-thinking music on the Sydney scene.”

James Street Tonight: “Love this tender piece from Dom Breen. It’s all in the details – production wise and lyrically – as he evokes warm Australian nights and familiar stories.” 4 stars

“James Street Tonight is thick with yearning and nostalgia, swirling around a specific memory of a time a place. Dom’s got one of those voices that’s immediately recognizable and some of his vocal sections hints at a latent capacity to go full Roy Orbison if he ever decided to cut sic. Also shoutout to the twinkling sound after the line ‘shimmer of diamonds’. I NOTICED.”