GUESTS TO BE ANNOUNCED

Taking in early and late sets at the intimate Oxford Art Factory, the London-based artist will delve into his already impressive catalogue with songs like ‘Butterflies’, ‘Clean Me Up’, which has close to 9 million streams on Spotify alone, and ‘Loving You’, which premiered on triple j’s Home and Hosed, scoring a 5-star review from the entire Unearthed team.

Since he started posting covers on YouTube as a teenager, Headon has garnered a dedicated and growing legion of fans around the world, and with his latest single ‘Bored’already making waves globally, the young artist is on an incredible upward trajectory.

He’s been dubbed a “star on the rise” and a “seriously impressive force in pop music” by triple j, who featured him as their Unearthed Feature Artist in July last year, played capacity UK rooms last year, has amassed over 25 million streams across all platforms to date and has close to 100K Instagram followers.

Released in September 2020, Headon’s six-track The Goodbye EP has collected over 2 million Spotify streams alone, the UK’s Independent calling it “an honest and open insight into life as a millennial in 2020, pairing thought-provoking lyrics with upbeat tempos”, adding “Thomas Headon is definitely one to watch”.

He cites Rex Orange County, The 1975, Tyler The Creator and Harry Styles as influences, but Headon is well and truly carving out his own path. Catch this indie-pop sensation live in action when he plays Sydney’s Oxford Art Factory next month!

VIDEO: ‘Clean Me Up’ by Thomas Headon 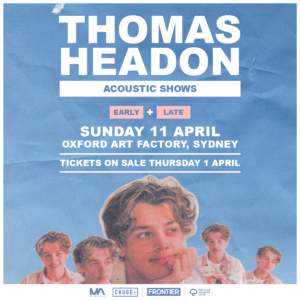