DMA’S’ latest album For Now found the Sydney trio’s fan base swell with a rush of new devotees. It earned three ARIA Award nominations for Best Group, Best Rock Album and Best Independent Release, while their growing status saw it reach at #7 on the Australian ARIA Album Chart and #13 on the Official Album Chart in the UK – their highest UK chart position to date.

Now, the band is set to release their MTV Unplugged (Live In Melbourne) album on Friday 14 June – available to pre-order here. Having only recently launched in Australia for the first time, the DMA’S MTV Unplugged recording saw the trio become one of the first Australian bands to play the iconic program. It’s a format steeped in history following classic sets from Nirvana, Oasis, R.E.M. and many more.

“It was the most fun I’ve had in a while, just rearranging the songs and hearing them in a different light,” says Johnny Took. “To be able to do this is a bit of a dream come true.”

Renowned for their anthemic energy, MTV Unplugged (Live In Melbourne) finds DMA’S stripping their songbook back to basics. Focusing on acoustic guitar, piano, violin and cello, these new arrangements unveil fresh new perspectives on the songs – honing in on the poignancy of the band’s lyrics, and their classic songwriting.

The set makes an immediate statement with ‘Feels Like 37’, which substitutes its rush of spiky melody with a more reflective atmosphere. Numerous fan favourites such as ‘Step Up The Morphine’, ‘In The Air’ and ‘Lay Down’ resonate in their new form, while the album also features their previously unreleased, violin-driven take on the Madonna classic ‘Beautiful Stranger’.

MTV Unplugged (Live In Melbourne) has today been launched with the emotionally-charged acoustic version of ‘The End’. This represents DMA’S’ first live performance of the song, which has since become a staple of their live sets. The original studio version was recently added to Radio X’s daytime list and to Absolute Radio’s B-list.

WATCH THE UNPLUGGED VERSION OF ‘THE END’

DMA’S are Johnny Took, Tommy O’Dell and Matt Mason. Forming in Sydney they debuted with their self-titled EP in 2015 featuring their breakout hit ‘Delete’. Their full-length debutHills End was their domestic breakthrough full-length debuting with an impressive top 10 ARIA Chart position and has become a Brit Certified Breakthrough Album, while the follow-up For Now expanded their profile across the globe.

Having previously played shows with Liam Gallagher and The Kooks, DMA’S are currently in the UK kicking of a run of headline shows across the UK and Europe, wrapping up with sets at a number of key festivals. 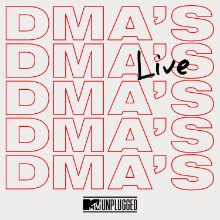