“Phil had written the lyrics when he was living in L.A. at the end of last year,” recalls Leon Debaughn [keys, production], “We slowly worked on the music from there. I think it’s important to release a song like this right now. There should be some more love in the world.” Elaborating on the lyrical content of the new single Philip Slabber [vocals, guitar, production] continues, “This song is about the different ways in which we communicate our love for each other. How special it is to find someone that speaks the same love language as you. It’s a celebration of the uniqueness of relationships.”

Crooked Colours have quickly earned applause as one of Australia’s hottest new electronic acts, scoring over 100 million worldwide streams thus far with a series of increasingly popular tracks – including the breakthrough single, ‘Flow‘ – and show-stealing festival performances around the globe. Selected by triple j as a Feature Album for “expanding their spellbinding sonic world,” LANGATA, the band’s 2019 sophomore album, was a feature album on hit #1 on the Dance Albums Chart as well as top 10 on the overall ARIA Albums Chart, fueled in part by tracks like ‘Do It Like You,’ ‘I’ll Be There‘, and ‘Never Dance Alone (Feat. Ladyhawke).’

Recently, the band spent over a year touring around the world and playing massive sold-out shows throughout North America as well as breakout performances at festivals such as Bonnaroo, Firefly, Electric Forest, Life Is Beautiful, CRSSD and more. This past March, while on the road with fellow Australian band RÜFÜS DU SOL, the band put their touring on pause in order to ensure the safety of their fans and crew. The band is looking forward to touring again and playing rescheduled dates at Brooklyn Mirage in New York, Red Rocks Amphitheatre in Denver and festivals such as Outside Lands and Lightning In A Bottle in California.

Extracting harmony from the union of seemingly disparate elements, Crooked Colours exist at an elusive crossroads between delicate acoustic instrumentation, evocative vocals, and dancefloor-ready synth transmissions. The Australian trio—Phil Slabber [vocals, guitar, production], Leon Debaughn [keys, production], and Liam Merrett-Park [drums]—could just as easily soothe a quaint coffeehouse or a chaotic club. Generating over 100 million streams, selling out shows on multiple continents, and garnering looks from Billboard, NME, YourEDM, This Song Is Sick, and more, the group further sharpen this shape-shifting sound on a series of singles and their forthcoming debut for Atlantic Records.

Crooked Colours have spent quarantine back in Fremantle, Western Australia to focus on creating new music. Stay tuned for more exciting releases from the rising band, “Love Language” is the first taste of what’s to come! 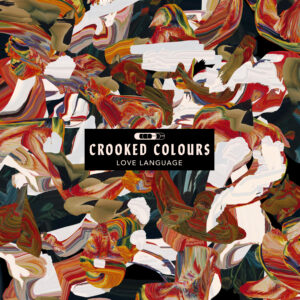