Two weeks ago, Sydney-via-UK producer Jonny Reebok released his debut track ‘Aphrodite Dub’ on Soothsayer. In that time the song has made quite the splash online, premiering on Majestic Casual before being added to the channel’s Spotify playlist, along with Friday Cratediggers in the US. On Apple Music, ‘Aphrodite Dub’ was added to Loops globally, Electronic Daily, New In: Electronic, indie + chill, Electronic Hot Tracks in the US and New Music Daily locally.

Soothsayer is thrilled to release ‘Aphrodite Dub’ back-to-back with new track ‘Ghost Town Riddim’, the smooth dubstep offering that completes the double A-side package. Riding at 140 BPM, ‘Ghost Town Riddim’ is a moody track that heightens the senses. Reminiscent of original Dubstep pioneers ala self-titled era Skream, Benga and Kode9 – it’s heady, rich and immersive all the while being a sound all of his own.

“‘Ghost Town Riddim’ is a straight up dubstep track, inspired by the mood of The Specials ‘Ghost Town’. I couldn’t help myself but add some classic breaks 2 into the mix. These tracks are my first time experimenting with sending digital sounds through analogue equipment. Kinda wild to think that my sound has gone from house 2 garage 2 dubstep just like the original UK scenes progressed in the 90s into the 2000s.” – Jonny Reebok

Jonny Reebok has been creating first-rate club tunes since his 2018 online release ‘You Don’t Know Flavours Bwoy’ which saw radio love from triple j and FBi. His infamous remix of Soothsayer’s electronic duo ALTA’s single ‘Figured Out’ has amassed over 1 million plays on streaming services and has seen him curate mixes for Let Them Eat Cake as well as perform alongside the likes of Shanti Celeste, Moxie and Peach at Colour Club in 2019.

‘Aphrodite Dub/Ghost Town Riddim’ sees Jonny Reebok cement himself as an artist on the rise. Soothsayer is thrilled to share this double A-side from the Sydney-sider and can’t wait to see what’s next.

Tune in as Jonny Reebok takes over the Rinse FM airwaves with a special guest mix this Saturday, August 29 6PM BST/3:00AM AEST.

Out now through Soothsayer 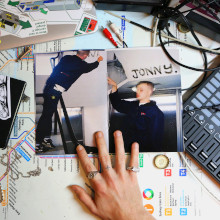