Watch the new video from City Calm Down
Directed by Matt Sav
Taken from upcoming album Television
Out Friday 23 August
Touring nationally in October – on sale now via www.citycalmdown.com

“I grew up in a household of five boys, and my mum took on the primary caring duties for the five of us. We weren’t easy kids to look after: babysitters usually only lasted a couple of visits. I guess this song is a way of saying thanks to my mum (and dad) for putting up with the five of us.” – Jack Bourke 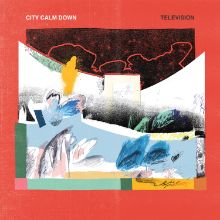