I OH YOU are thrilled to share the news that Brisbane rockers Violent Soho will be playing their first Sydney headline show in 2 years on Thursday 31 March at Sydney’s Roundhouse. Appearing with special guests Dear Seattle + Teen Jesus & The Jean Teasers, this show will mark the first time the band have graced a Sydney stage since the release of their ARIA #1 album Everything Is A-OK.

Recorded by Australian producer Greg Wales (You Am I, Sandpit, Youth Group), Everything Is A-OK is a headlong cannonball-ride into the darkness of suburban abandonment and decay. Marking the second time the band have taken out the #1 spot on the charts, Everything Is A-OK was nominated for 4 x ARIA Awards, 3 x National Live Music Awards, 1 x AIR Award and 1 x J Award.

There’s no question that this band remains one of the most in-demand live acts in the country, with their last tour of the East Coast selling out in under 2 hours, providing fans a sweaty, electrifying reminder of what this band brings to a room.

“We are beyond stoked to play our first headliner in Sydney for over 2 years. Even more pumped to play with our mates Dear Seattle and Teen Jesus [and the Jean Teasers].  We haven’t been able to play a headliner in Sydney since we released A-OK, so we’re planning something special for sure – it’s gonna be a huge night! See ya down there!” – Violent Soho

Violent Soho are psyched to be returning to the festival circuit next year, having recently been announced on the 2022 Splendour in the Grass line-up, plus Yours & Owls, UNIFY Gathering and Queensland’s Best Night Ever.

Sydney fans are encouraged to secure their tickets fast, as this is not a show to be missed! Tickets available via moshtix.com.au

PRAISE FOR EVERYTHING IS A-OK“Violent Soho are more vital than ever when nothing is A-OK. In some ways, Everything Is A-OK is their least ambitious album, but arguably their most accomplished.” – triple j“Never has an album felt more relevant. Everything is A-OK unrelentingly strives for positivity in the age of uncertainty. It’s the “fuck it” tonic we all need.” – The Brag“…Soho have delivered a calm and more chilled offering, that still packs that iconic Mansfield punch where it’s needed the most.” – Wall Of Sound – 8/10 stars“Everything Is A-OK is Violent Soho’s most profound and genuine project to date.” – Play Too Much“Violent Soho have brought the gig to our living rooms and made us forget about the impending doom around us for 34 glorious minutes.” – Tone Deaf (AOTW) 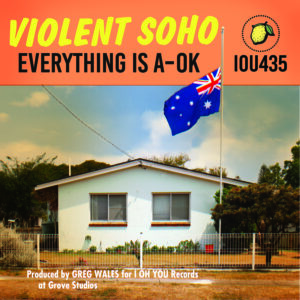