The melancholic ballad is poised to leave listeners spellbound as vocalist Joshua Swanwick delivers his most emotive performance to date. Heart-on-sleeve lyricism transmits pained emotion and serves as the raw nucleus of “Numb”.

All musical sections, from the huge choruses with empowering leads, to stripped-back ambient verses serve to deliver the powerful feeling behind the lyrics. These elements are enhanced by mammoth production from Ocean Grove’s Sam Bassal, who produced, mixed and mastered the track.

“Choosing the third single off this EP involved a lot of back and forth between a few of our tracks,” reveals the band. “Ultimately though, Numb won out as it’s just that little bit different to the rest. The addition of the cheeky lil’ guitar solo in the bridge was a nice touch. Big thanks to Sam for pushing the idea during the production and for making the track as huge as it is.”

Hailing from Melbourne’s West, four-piece melodic alt rock outfit Vermont is comprised of members Joshua Swanwick (Vocals), Jono Hnatejko (guitar), Nathan Borg (Bass) and Curtly Lyon (Drums). Vermont emerged with their own brand of alternative rock in 2017 when they debuted with “Lonely Mind” and shortly after followed it up with their heart-wrenching melodic anthem “Breathe” in 2018.

Since releasing their self-titled debut EP in 2020, Vermont have been unwavering in their taste for catchy chorus hooks, angsty, powerful vocals and sweet lead lines. Since then the four-piece have cut their teeth live supporting the likes of Stuck Out, Stepson, Pridelands, Rumours, Reside, The Comfort and Sleep Talk.

Their last single, “Headlights” was added to Spotify’s ‘Rock Out’ and ‘Homegrown + Heavy,’ playlists with triple j Unearthed’s Dave Ruby Howe describing the song as, “Potent! Vermont unlocked something visceral on this one.”

One thing is for sure, Vermont never fail to capture an aura of emotion and sentiment through their ability to story-tell. “Numb” is the third single from the extended play, ‘Mature Minds For Overzealous Kids‘ out on July 15, pre-order’s live here. 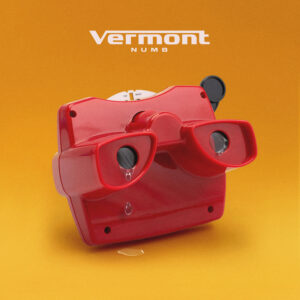