‘EVERY SIDE OF YOU’

With just over a week until the release of his third studio album, In Our Own Sweet Time, Vance Joy shares another cut from the record in the beautiful ‘Every Side Of You’. Excitingly, he also announces the news that his upcoming sold-out show at Budweiser Stage (15,000 capacity) in Toronto will be a one off live-streamed concert on YouTube, so local fans will be able to hear his new songs live and celebrate alongside fans on the other side of the world on release day in Australia.

‘Every Side Of You’ was written with Vance Joy’s close friend and collaborator Dave Bassett, who also co-produced the track with local producer, Edwin White. The stirring love-song arrives with a cinematic, evocative video, which was filmed in regional Victoria by renowned director, Bill Bleakley.

“I wrote this song in July 2020. I was in Melbourne and I did a song-writing session over zoom with my friend Dave Bassett. I was excited about the cruisy feeling of the guitar and the rhythm of the lyrics in the verse. My fave lines are in the second verse: ‘I don’t know what tomorrow knows, where these feelings go, but I plan on being ’round, time is nothing when you look at me, can’t you see this things meant to go on way past right now.’

“I’ve definitely seen some changes in myself over the last few years and in more recent times. I’ve opened some doors and become more relaxed and loving. It also touches on being apart, there’s that sweetness and that tension. In music when you’re not touring, you’re there every day for six months, then you go away for eight weeks. That can be difficult.”– Vance Joy

Vance Joy will be back in Australia for a very special performance at the MCG on the Queens Birthday long weekend Monday, as part of the amazing fundraising to fight MND prior to the AFL’s Big Freeze match between Collingwood and Melbourne football clubs.

The new album, In Our Own Sweet Time marks Vance Joy’s third studio offering. Written mostly during the pandemic, and fuelled by old friends, new memories and finding love in a not-so-hopeless place, the album centres on the idea of creating a life – and a world – with someone.

“I’m always drawn to the idea of timelessness or that shared moment that takes you out of the chaos outside. If the world is crazy, you can retreat somewhere. It’s always hard to think of the right title but I think that sums up the album perfectly.” – Vance Joy

For a record created mainly through Zoom writing sessions during the pandemic, In Our Own Sweet Time is inviting and intimate. It features 12 new tracks, including current single and radio hit ‘Clarity’ along with ‘Missing Piece’ and ‘Don’t Fade’. Released last May, ‘Missing Piece’ quickly became a fan-favourite. Now with over 150 million streams worldwide, and certified double platinum in Australia, it was the #7 highest-selling Australian single for 2021 according to ARIA. It was also awarded Best Video at last year’s awards – the singer-songwriter’s third ARIA to date.

Vance Joy’s previous two albums 2014’s dream your life away and 2018’s Nation of Two both reached #1 on the ARIA Albums Chart on release and have secured double-platinum status. Along with 5 billion global streams at DSPs, he also holds ten ARIA-certified platinum and multi-platinum singles, including ‘Riptide’ at 14x platinum, ‘Fire and the Flood’ at 5x platinum and ‘Georgia’, also 5x platinum. His second album Nation of Two cracked the Top 10 of Billboard’s ‘200’ Albums Chart on release and was #2 in Canada, and his songs have topped the Alt Radio and Triple A Charts in the US on more than one occasion. Check out all the highlights HERE.

Currently finishing a run of shows in the US ahead of his live-streamed show in Canada on June 9 (June 10 locally) and local performance at the AFL’s Big Freeze, Vance Joy will be back again in September for The Long Way Home Tour. See www.vancejoy.com/longwayhometour for show details. 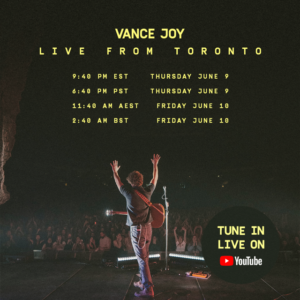 VANCE JOY IN OUR OWN SWEET TIMEfeaturing new single ‘Clarity’, ‘Missing Piece’, ‘Don’t Fade’and ‘Every Side Of You’Out Friday 10 June through Liberation Records Pre Order In Our Own Sweet Time here