Brisbane’s UNI/VS hit the ground running in 2017 and have wasted no time between solidifying themselves as ones to watch not only in Brisbane, but the Australian heavy scene. Today the melodic hardcore trio are offering up “Hellhound” as their first drop of 2020 and are backing it up with an accompanying Hellhound East Coast Tour to boot!

Hellhound was produced, mixed & mastered by Gareth Hargraves (Young Lions, The Comfort, The Brave) and features the thundering heavies and soaring melodic intervals that UNI/VS master. The single was inspired by the adverse effects technology and the digital age is having on the human race. On one hand being more connected then ever but on the other, that same power is being used to divide and outrage. Vocalist Scott Willis explains that “We are constantly being fed information that may have no real truth or a warped perspective being derived from algorithms that keep us coming back for more.“

The music clip was filmed, directed and edited by Dan Ramsay Visuals and depicts a dystopian-style setting in which the protagonist flits between a digital world and the real world, showing the separation between the two. A lonely and cold reality exists up against the action packed, sensory overloaded virtual scenes of the digital age.

Since the release of UNI/VS sophomore EP “Smile”, the bands fan base has grown rapidly after touring the EP across Australia early 2019. Last year began to snowball as they proceeded to play sold out shows around the country supporting acts such as Dealer, Confession, Windwaker and Mirrors. The band have announced that they’ll jet off on a short East Coast run again, delivering their new single to audiences new and old beginning on Friday March 6 with a hometown show at Brisbane’s Crowbar before heading to Sydney on Saturday March 21 to tear apart The Burdekin Hotel and finally off to Melbourne to complete the trifecta at Bang on Friday 27 March – supports to be announced.

Tickets are on sale now for UNI/VS’ ‘Hellhound East Coast’ Tour 2020 at https://linktr.ee/UNIVS and “Hellhound” is available now at iTunes, Spotify, Apple Music and all digital stores and streaming outlets. 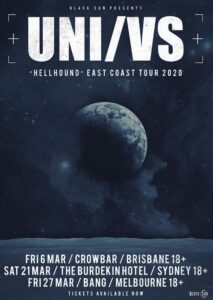