RELEASE NEW SINGLE AHEAD OF TOUR

IN SUPPORT OF BEYOND BLUE

Melbourne’s Cold Sleep are back with their second single of 2020, “Stopping All Stations Except South Kensington” and will be heading out on their Rock For Mental Health Tour – starting next week!

Mixed and mastered by the deliverer of musical gold himself, Chris Lalic (Windwaker, Rumours, The Last Martyr), Cold Sleep’s second single of the year takes its theme from vocalist Astina Lee’s commute to and from uni, aboard the Footscray line, stopping all stations except South Kensington. In short, the song serves as a reminder for listeners that you aren’t alone, and that help is out there if you reach out for it. Going a little deeper, the track takes its theme from Astina, and from her experience with isolation as a minority in Malaysia. Astina found metaphor in her commute to uni when she moved to Melbourne, and in her own words explains:

“I used to take the train from Footscray, which often stops at all the stations except South Kensington. One day I really looked when I went past South Kensington Station, and I saw how it looks abandoned and that no one has cared for it for ages. And I thought to myself, what if that was a person. How would it feel, having to watch as the world passes by but never stopping to give a second glance. The song became a metaphor for that feeling.”

The band will also be touring nationally in February in support of the release and raising funds forBeyond Blue along the way. Cold Sleep will begin their tour next Thursday at Adelaide’s Grace Emily Hotel supported by TORK, Burning Bridges and Smoke No Fire. Friday 14th will host the band at Melbourne’s Last Chance Rock & Roll Bar alongside Cicadastone, Verona Lights and All Is Violent before Saturday February 15 where the trio will play Sydney’s Hideaway Bar with support from Stellar Addiction, The Veil and Dirty Spells. Rounding out the tour on Saturday February 29 atThe Polo in Canberra, Cold Sleep will play their final show with Flash Anthem, Black Heart and Trace. Tickets available on the door!

In 2018 three souls came together in Melbourne Australia, dropping everything to pursue the pitfalls of rock in the big city. Frontwoman Astina Lee left her childhood home in Malaysia when she found that being a member of the LGBT community and the music that she wanted to create was not accepted in her home country and “can be quite dangerous there”. Drummer Steve Charlton also left country Victoria to pursue music and guitarist Rob Macfarlane left a career singing opera in Germany. Between the three of them, the trio combined their musical passions to create their new double single Petal // Stations –  representing a commitment to emotive storytelling set to a soundtrack of raucous power-chords.

“Stopping All Stations Except South Kensington” is available now at https://linktr.ee/ColdSleep and at iTunes, Spotify, Apple Music and all digital stores and streaming outlets. 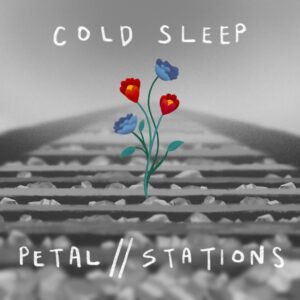 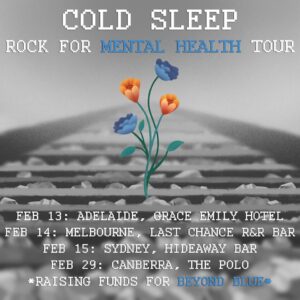