Last week, hard rockers Underoath launched a weekly series on their Twitch channel. During each episode, the band will stream an album from its catalog in full and go into detail about the writing and recording processes.

The first episode spotlighted Underoath’s latest album, 2018’s Grammy-nominated Erase Me, and was a smashing success. The episode featured producer Matt Squire and filmmaker Dan Newman, who shot a documentary about the record. A three-hour discussion ensued, with the band answering questions for rapt fans. Watch it here.

The next episode is slated for Wednesday May 13, 8PM EST (Thursday May 14, 10AM AEST), and it will dive deep into the band’s fifth album, 2010’s Ø (Disambiguation). The episode will mark the first time that the entire Ø (Disambiguation)-era version of the band sits down with both Daniel Davisonand Aaron Gillespie. It’s an event that fans surely won’t want to miss. 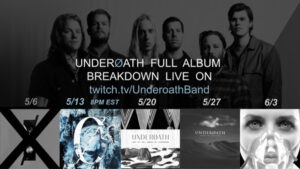 Future episodes will launch on Wednesdays and will feature producers, artists that Underoath have toured with, Twitch streamers who are Underoath fans, label personnel, friends, and other people who have been intricately involved in the band’s career.

Underoath released Erase Me, their first album in eight years, via Fearless Records in 2018. The band notched a Grammy nomination in the Best Metal Performance category for “On My Teeth” and spent most of the year on the road in support of the album — playing countless sold-out headline shows and headlining their first-ever arena show in their Tampa hometown.

Watch the making of this weeks featured album ‘Disambiguation’ below

The band also toured arenas with Breaking Benjamin in Spring 2019 and hit sheds with Alice In Chains and Korn that summer. Ultimately, Erase Me represented a watershed moment for the gold-selling heavy music luminaries whose inescapable influence can be felt in nearly every corner of hard rock. The album crashed the Billboard Top Hard Rock Albums Chart at #1. It sees the band refine its trendsetting but inimitable style with heavy intensity and hypnotic hooks coursing through songs, like the aforementioned “On My Teeth,” “Rapture,” “Wake Me,” and the Top 15 active rock single “ihateit,” which have cumulatively tallied over 30 million streams in a few months’ time.