“During these strange times, we found it really important to do something fun and enjoyable for our fans,” Capstan explains. “This is a song we have had for quite some time, and even though it didn’t make it onto our album Restless Heart, Keep Running, we always knew we wanted to track and release it someday. This is our little gift to all of you. Turn it up and turn ’em loose. Cheers!”

Capstan released their latest album ‘Restless Heart, Keep Running’ via Fearless Records last year. Listen to “There Is No Answer” from the album here. Watch the video for “We’ll Always Have Paris,” also from the album, here.

Capstan independently released ‘Parting Gifts‘ and ‘Seasonal Depression‘ back in 2015. The band followed with 2016’s ‘Cultural Divide‘ and 2018’s ‘In The Wake of Our Discord‘. Along the way, “Can’t.Lie.Around.Remembering.Everything,” “Reprieve,” and “Wax Poetic” each surpassed one million Spotify streams, as the band regularly attracted over 100K monthly listeners on the platform. Simultaneously, the band hit the road with Trash Boat, Doll Skin, and Silverstein, in addition to lighting up a spot on Warped Tour.

Upon signing with powerhouse label Fearless Records, the five-piece churned out the one-off “Stars Before The Sun” (listen here) and put up nearly half-a-million streams, and garnered praise from The PRP and Substream Magazine, to name a few.

In early 2019, the band hit the studio with producer Andrew Wade (A Day To Remember, Wage War) and crafted ‘Restless Heart, Keep Running’, introducing it with the bold and bruising escapist anthem “Fix.” Capstan have drafted their own signature style of progressive post-hardcore.

livebait” is available now to stream and purchase at all good online outlets and streaming platforms! 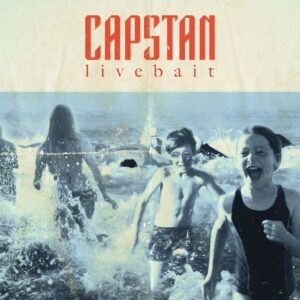