TRYHARD is the moniker of bedroom-pop artist and producer James Comito from
Melbourne, who releases his debut single ‘Dopamine’, a song about overthinking and dealing with anxiety in less than ideal situations. A fresh new face with an unparalleled sense of ambition and a belief that pop shouldn’t be a dirty word, TRYHARD is characterized by earworm hooks, huge synths and lyrical authenticity.

James started writing songs at the tender age of eleven, knowing full well that his dream
was to fill the same arenas as his diverse range of influences from Mayday Parade to The
1975, to Charli XCX. James combined his natural talent as a top liner and instrumentalist to
writing sessions with a variety of other artists, garnering early interest from labels.

However, writing songs for others began to feel suffocating; James’ distinctive honesty in
songwriting meant that he needed a project that felt truly his own.

TRYHARD has now emerged in 2020 as a fully realized pop act, after years of work behind
the scenes, writing for and collaborating with fellow up-and-comers Chris Watts, Muki, Oh
Boy and more. Excitingly, his upcoming releases are the result of an exclusive collaboration
with Ben Field, who has previously worked with festival favorite Mallrat and has over 20
million streams to his name.

Each of James’ three singles (all set for release in 2020) speak to a youthfulness and
freedom that the 22-year-old is able to embody so authentically. A new generational voice,
with the talent and work ethic to back it up, TRYHARD has arrived and is here to stay… 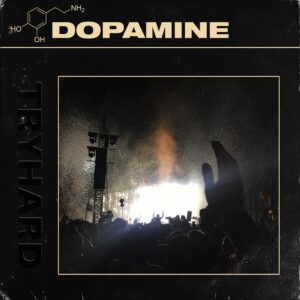 Listen to Dopamine below