PRAISE FOR TRIPLE ONE

Following three widely-acclaimed EPs and a string of venomous singles that have won them a global fanbase, the release of Panic Force marks the group’s most boldest and most eclectic work yet; a special achievement considering the group’s long history of breaking sonic barriers. The conceptual album chronicles the final days before a hypothetical war destroys Planet Earth, capturing the omnipresent feelings of dread and paranoia that have engulfed much of 2020. Panic Force features personal reflections on love, self-loathing and substance addiction; while exploring the broader themes of escape, mortality and the hubris of man.

Sonically, the album sees Triple One lean on the sombre, signature sound that made them global underground heroes (‘Loverose‘, ‘The Conformist’), while also experimenting with tongue-in-cheek pop sensibilities (‘Sunshine‘, ‘Space Boogie Anthem’). More than ever, the band infuses live instrumentation and guitar-driven brashness into their sound (‘Yap! Yap! Yap!’, ‘Where Is He?’) with the help of key collaborators including Matt Mason of DMA’S, Dan Kerby of 28 Days and 18YOMAN. What results is a smorgasbord of sounds that tie seamlessly across the 12 tracks on Panic Force, proving that their assertive style can reach far beyond the hip-hop realm.

To the band, Panic Force means fast living and the unknown of what will come next. “It’s an amalgamation of everything you could have ever wanted” says vocalist Lil Dijon, continued by Obi III Terrors, “it’s reminiscent but also celebratory.” As one of Australia’s most versatile hip-hop outfits, Triple One push the envelope further on their debut full length, traversing thrilling peaks and pitch-black lows. Panic Force is a triumph of raw reflection, acknowledging our flaws and all the things that ultimately make us human. Throughout the album’s track listing, the group’s signature diversity remains more visible than ever, while lyrically, conceptually, and sonically chartering new territory.

While Triple One will celebrate Panic Force with a sold-out show in their hometown of Sydney, they will bypass current COVID restrictions with a special streamed performance airing next week on YouTube, featuring unique renditions of Panic Force tracks in a curated setting. It’s a small taste of Triple One’s vital live show before they hit the road once more in 2021, with more details to be revealed this Monday.

Panic Force by Triple One is out now, buy/stream it here. 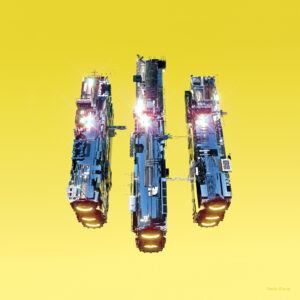 Having accumulated underground buzz for years through viral early singles ‘Doozy‘ and ‘Overflow‘ and their notorious live shows, Triple One broke into Australia’s mainstream consciousness in 2018 with singles ‘Showoff‘, ‘Tarlo‘ and ‘Valentine Kid‘ being added to high rotation on triple j. Profiles from Complex, GQ and Highsnobiety followed, as did a spot on Youtube’s first-ever ‘Artists to Watch’ list and spotlights as triple j Unearthed ‘Artist of the Week’, Apple Music’s ‘New Artist of the Week’ and more. In 2019 they consolidated their takeover of Australian airwaves with pensive, mental health-centered, ARIA Gold-certified ‘Butter‘, which scored rotation on triple j and FBi Radio; release their third EP, The Libertine 2, and their collaboration with Matt Corby and Kwame, ‘So Easy’.

The release of Triple One’s long-awaited debut LP follows three EPs and a torrent of standalone singles that have catapulted the foursome from underground buzz act to garnering national and international acclaim, including lead single ‘Loverose‘, their ARIA Gold-certified anthem ‘Butter‘ and radio favourites ‘So Easy‘ and ‘Handyman‘. Triple One‘s notoriously chaotic live gigs include a sold-out national tour in 2019, and show-stealing sets at Listen Out, Hidden, and Falls Festival. Along the way, they’ve impressed and surprised with their insatiable, all-consuming appetite to continuously venture into uncharted artistic terrain, and a rebellious desire to constantly fold new sounds and textures into their brand of unbounded, unclassifiable hip-hop.