In less than one month’s time American megastar, POST MALONE will commence his whopping big 10-date Australian arena tour, starting off at Perth’s RAC Arena on Friday, April 26 before making his way to Adelaide’s AEC Arena, followed by three nights at Melbourne’s Rod Laver Arena, two shows at Brisbane Entertainment Centre and three final performances at Sydney’s Qudos Bank Arena on May 7, 8 and 9.

In preparation, our dearly beloved “Posty”, the Grammy nominated, history-making, multi-platinum selling superstar, has today confirmed that JADEN SMITH and TYLA YAWEH will join him across all Australian tour dates – taking the excitement levels of fans right across the country up a notch, or two.

Final tickets for all shows are on sale now.

Last spotted ringing up customers groceries at Woolies in Melbourne just last month, fashion icon, talented actor and musician, JADEN SMITH, returns down under to join Post Malone on his Australian tour dates. Making his big screen acting debut in “The Pursuit of Happyness” in 2006 starring opposite his father, Smith’s performance won him an MTV Movie Award in 2007 for “Breakthrough Performance” and gathered universal acclaim for his nuanced and heartwarming performance. In November 2017, Smith released his album “SYRE” via his own MSFTS Music/Roc Nation label. The album debuted in the Top 10 on Billboard’s Rap Chart, Hip Hop / R&B Chart and as #23 on the Billboard 200 and recently surpassed 100 million streams on Spotify worldwide. Smith was named one of TIME’s ‘Top 30 Influential Teens’ of 2017 and one of Pandora’s Artists to Watch of 2018. Smith dropped his album “Cool Tapes Vol. 2” in November 2014 exclusively on his app; Jaden Experience. The app is the first to be released in a new platform that allows artists to distribute their music directly to their fans creating an album-like experience through a dedicated platform. Next up Smith will release his latest album ERYS in the top of Q2. Serving as the face of Louis Vuitton’s Spring/Summer 2016 collection, Smith’s greatest endeavor has been his own clothing/lifestyle brand, MSFTSrep. Smith is a passionate advocate for a cleaner world and has been honored for his leadership and action on environmental issues, which includes cofounding ‘JUST Water’, the most environmentally conscious, commercially sold water bottle.

With a rockstar attitude and a creative wingspan that encompasses pop, rap and R&B, TYLA YAWEH has rocketed to ubiquity in a relatively short period of time, bringing his diverse spate of tracks to life with Post Malone while on tour with him across the UK and USA. His debut project “Heart Full of Rage”, released February 2019, was the culmination of bottling up emotions while on the road and capturing those sentiments on a 10-track collection of songs that are introspective and insightful, matched by a club-ready sound. His recent success may be a blur, but it’s been a gradual ascent for Yaweh. Growing up in Florida, his family life exposed him to everything from church music to area rappers like Lil Boosie and Trick Daddy. He began performing at only 14 years of age and after his first track ‘Alone’ took flight on a file-sharing site “Hulkshare” Yaweh was tasting the beginnings of where is career might be headed. After moving to California on a dollar and a dream, nineteen year old Yaweh caught the attention of managers Tes Siyoum and Bobby Greenleaf, as well as Post Malone’s manager Dre London, setting his career on a slingshot path ever since.

Posty has captivated and totally infatuated Australian fans, proven further by the overwhelming response for tickets and the five additional tour dates added shortly after initially going on sale – this is set to be one of the biggest hip-hop tours of 2019 and one not to be missed!

QUDOS BANK ARENA, SYDNEY
TUESDAY MAY 7
WEDNESDAY MAY 8
THURSDAY MAY 9 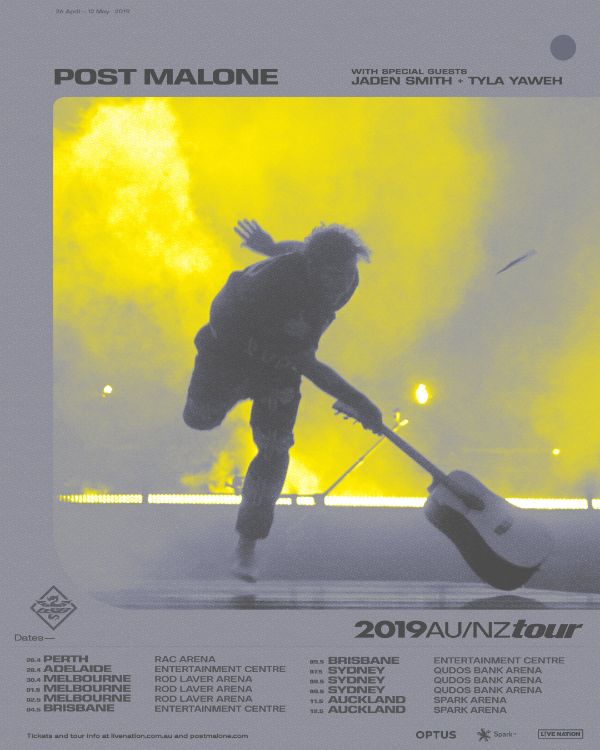 FINAL TICKETS FOR ALL SHOWS ARE ON SALE NOW