Arising Empire is very proud to welcome the London based melodic metalcore 5-piece THECITYISOURS to the family!

The band has released their brand new single ‘Violent’ together with a fantastic music video shot by their new shouter and multi-talent Oli Duncanson.

“We are ecstatic to have joined the Arising Empire family, among a roster of so many talented bands. The team at the label have been incredibly supportive of our creative vision for this record and allowed us to spread our wings to create a collection of music unlike anything we have ever attempted before. Some of our biggest influences have been associated with this great team over the years, so we are very excited to see what the future has in store.” – Mikey Page

Since forming in 2015, this London based melodic metalcore 5-piece have been making strides in the alternative rock and metal scene. Extensive UK touring of their octane-fuelled live sets, along with the success of debut album ‘LOW’ (August 2019), which smashed into the top 5 iTunes metal charts, with a string of singles appearing in top Spotify and Amazon Music editorial playlists, has gained praise and recognition for THECITYISOURS with peers and industry, and further cemented the loyalty and dedication of a growing army of fans.

2019 was a very busy year for the band, with appearances at a slew of UK festivals including Camden Rocks, Macmillan Fest, Burn It Down, Holloween, a fly in appearance at High Fives Festival in Sweden, a headline set in the Doghouse Tent at the revered Download Festival where an audience of 4000+ festival revellers got to witness CITY in full effect, and a sold out album release show at Boston Music Rooms in London.

Following the departure of long-standing vocalist Sam Stolliday the band unexpectedly found themselves in unknown territory, with a burning question – where do we go from here? 12 months on, the band are back with the introduction of new vocalist Oli Duncanson and ready to welcome a brand new era of THECITYISOURS. 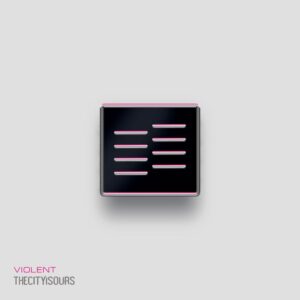