After the pace setting release of their praised debut album »Unalive« in 2019, modern horror metal band MISTER MISERY, spawned from the hollowed parts of Sweden (2018) has not slowed down, despite the fact a global pandemic crushed schedules, MISTER MISERY kept busy during quarantine, writing new breathtaking material, while still releasing numerous compilations for their fans in the meantime.

MISTER MISERY recently launched pre-orders for their new album »A Brighter Side Of Death« and will be available as CD, a limited special colored vinyl and a special fan bundle including CD and rare items on the 23rd of April 2021 via Arising Empire.

The band just unleashed the next demon of their horror show. ‘Mister Hyde’ is the third single of their upcoming album »A Brighter Side Of Death«. This album marks a milestone for the band and opens up the next chapter of their horror story! Stronger, scarier and more diverse than ever.

Pre-order the album now at https://MisterMisery.lnk.to/abrightersideofdeath, 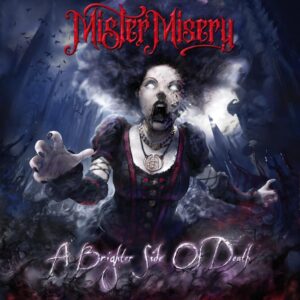