+ DEBUT SINGLE ‘ONCE UPON A HILLTOP’

The Temper Trap’s Jonny Aherne has announced a new solo project called Shacks & Palaces and released his debut single ‘Once Upon A Hilltop’ alongside an official video. Billboard premiered this first taste of Shacks & Palaces, saying “The visual for ‘Once Upon a Hilltop’ stars The Temper Trap bassist’s own kids, Stella and Jesse, dressed in whimsical bird costumes as they explore Brooklyn with their dad. “One!/ Once upon a hilltop/ Two!/ It’s one for you, it’s one for me/ Three!/ Three times we both got lost/ Lookin’ at the sun/ Lookin’ at what’s to come,” Aherne croons on the track’s folk-inspired chorus.”

VIDEO: ‘Once Upon A Hilltop’ by Shakes & Palaces

The Australian-born, Brooklyn-based artist creates upbeat, folk-informed indie pop, sparkling with likenesses to eclectic icons from The Flaming Lips to Modest Mouse. His music ranges from infectious to truly exaltant, a blissful blend of bouncing melodies, boomerang hooks and colorful production. Aherne’s voice —  a jubilant, stony sort of roar — is recognizable from his contributions to the mid-aughts sensation, but here, rings absolutely reckless with spirit.

Aherne says, “The song started with a challenge to write about something beautiful. Love, adventure, and imagination became the parameters of its creation. At times I felt like a kid as I wrote this song, letting go of adulthood complexities and embracing the wild childlike hope lands that still dwell in me.”

The video appropriately stars Aherne’s own young children, who dance their way through everyday experiences — going out for pizza, exploring the neighborhoods of Brooklyn, playing in the park. This spirit of innocent bliss and childlike wonder recurs throughout Aherne’s offerings, lifting Shacks & Palaces from the increasingly dark, apocalyptic themes occupying much of pop, and letting it shine as something relatable, inspiring, and sincere.

Once Upon A Hilltop’
Shacks & Palaces 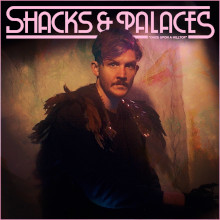