DREAM ON DREAMER – ‘WHAT IF I TOLD YOU

IT DOESN’T GET BETTER’

Good things must come to an end and to celebrate 11 years of a remarkably iconic career, Dream On Dreamer are hanging up their hats and are bidding farewell. But before they do, they are celebrating with the release of their fifth and final studio album, What if I Told You It Doesn’t Get Better out March 27 via Believe.
PRE ORDER WHAT IF I TOLD YOU IT DOESN’T GET BETTER HERE
Dream on Dreamer was formed in 2009 by founding members Marcel Gadacz and Callan Orr who have since been producing music with the aim to instil themes of ambition and passion. The band has been built off the belief that nothing should be done by half measures and you’re either all in or not at all. It is with this strong sense of passion to be able to present themselves as nothing but the best that they can be, that they have decided to call it quits, 11 years since the bands inception.
However, the band have always held their fans in high regard and therefore aren’t leaving them empty handed, as they set to release one final full-length record which the band has described as ’the most diligently crafted and strongest representation of the band’s themes and values to date.
The band has had an incredibly rewarding career, racking up over 50 millions streams, touring 24 countries and supporting some of the biggest names in the industry. Receiving multiple award nominations, including ARIA’s Best Heavy Rock Album it’s no understatement that the group have long held the limelight amongst heavy music fans across the globe.
Please join Dream On Dreamer on their biggest headline tour to date playing your favourite bangers from their entire career a well as their new album, What If I Told You It Doesn’t Get Better and let’s send them off with a bang!
Farewell Statement:
The spirit of this band has always been to create and perform music wholeheartedly with all of our attention and passion. After 11 years it seems we are at a crossroad where other areas of our personal lives require that care and attention to be focused. So it is with heavy hearts that we are announcing the end of an era that has been Dream on Dreamer.
Watch the video for Feel So Empty here:
We will never take for granted the incredibly rare gift that we have been blessed with, the experiences we have gained through music, the connections we have made with people and the community we have been so lucky to create and be apart of. This band has shaped us all personally in such a strong way. For all of this we feel greatly indebted to our fans.
We are so proud of the music we have created. We feel so fortunate to have such a supportive fanbase and hope you can continue to support us as we make this transition in our lives.
OUR DATES:
THURSDAY 2 APRIL – EDGEHILL TAVERN, CAIRNS QLD
FRIDAY 3 APRIL – DALRYMPLE HOTEL, TOWNSVILLE QLD
SATURDAY 4 APRIL – HARVEY RD TAVERN, GLADSTONE QLD
THURSDAY 9 APRIL – RACEHORSE HOTEL, IPSWICH  QLD
SATURDAY 11 APRIL – CROWBAR, BRISBANE QLD SOLD OUT!
SUNDAY 12 APRIL – CROWBAR, BRISBANE QLD NEW SHOW
THURSDAY 16 APRIL – ETTAMOGAH, KELLYVILLE RIDGE NSW
FRIDAY 17 APRIL – THE CAMBRIDGE, NEWCASTLE NSW
SATURDAY 18 APRIL – CROWBAR, SYDNEY NSW
THURSDAY 23 APRIL – VILLAGE GREEN, MULGRAVE VIC
FRIDAY 24 APRIL – PIER HOTEL, FRANKSTON VIC
FRIDAY 1 MAY – LION ARTS FACTORY, ADELAIDE SA
SATURDAY 2 MAY – BADLANDS, PERTH WA
SATURDAY 9 MAY – THE ALTAR, HOBART TAS
THURSDAY 14 MAY – CORNER HOTEL, RICHMOND VIC NEW SHOW
FRIDAY 15 MAY – CORNER HOTEL, RICHMOND VIC SOLD OUT!
FRIDAY 22 MAY – SOOKI LOUNGE, BELGRAVE VIC 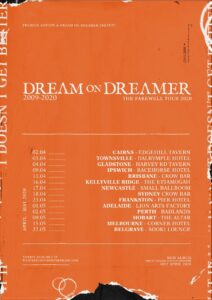 WHAT IF I TOLD YOU IT DOESN’T GET BETTER TRACK LISTING: