2019 was a watershed year for heavy music in Australia and indeed, the world. A titanium-strength year for releases worldwide, multiple Australian heavy music festivals stormed the scene, successful tour after successful tour destroyed venues all over the country – and the scene galvanised more than ever! It’s time to vote in Australia’s premier user-voted “for the heavy scene, by the heavy scene” top 100 countdown!

From 11am AEST/Midday AEDT that day, the countdown will be streaming at The Faction website & app, as well asiHeartRadio and their app, and brought to the world presented by TheMusic.com.au, and supported by iHeartRadio, Download Festival Australia, Unify Gathering, 24 Hundred & Wall of Sound!

Song Voting is open NOW at The Faction’s brand new custom-built voting platform at http://www.hardest100.com.au(and in the app!) – with punters who vote going into the draw to possibly win prizes from Download Festival Australia, Unify Gathering, 24 Hundred, The Faction Merch Packs and more. The voting system for the Hardest 100 of 2019 has been updated for this year’s voting, with users now able to create a shortlist to narrow down their choices before selecting their final 10 favourite heavy songs of 2019. Voting will close on Friday 13th March 2020 at 5:00pm AEDT.

Live Countdown parties will be taking place from 11am AEST/12 Midday AEDT in Brisbane (Crowbar), Sydney (Crowbar) and Melbourne (Stay Gold), with all event details to be found at The Faction’s event page! The Sydney event, taking place the day after Download Festival, will be co-hosted by Blunt Magazine!

2020 has brought new strength to The Faction, with the 24/7 online heavy music station now joining the iHeartRadioFamily, ensuring increased stability and audio quality for The Faction users! iHeartRadio Content Director, Brett ‘Nozz’ Nossiter, said that “iHeartRadio are proud to support The Faction, and pumped to once again be part of the metal-est of all metal countdowns, The Hardest 100! Fans will be able to listen in for their favourite metal tracks via the iHeartRadio app when they tune in to the countdown live on March 22nd!”.

The Faction is going from strength to strength, with the app recently updated (update your current app version or grab it today!) to accommodate some new features, such as, profile creation, far better access to follow The Faction’sstreaming platform playlists and Hardest 100 voting and to the Matter of Faction Podcast episodes. The Faction has partnered with numerous designers to provide merchandise inspired by The Faction and heavy music culture!

With Architects taking out both the Hardest 100 of All Time in 2018 with their track Doomsday, and then taking out the Hardest 100 of 2018 with Hereafter, heavy music fans will have to take a breather from voting for the band, as they had no eligible new music out last year! With a multitude of amazing heavy tracks released the world over in 2019, there is no shortage whatsoever to vote for!

Midday Sunday March 22 2020 (AEDT) will see The Faction’s Hardest 100 live countdown kick off, as well as the official Hardest 100 countdown parties in Brisbane, Sydney and Melbourne.. Voting is open now athttp://www.hardest100.com.au and will close on Friday 13th March at 5:00pm AEDT. The Faction Hardest 100 of 2019 is brought to the world presented by TheMusic.com.au & The Faction, and supported by iHeartRadio, Download Festival Australia, Unify Gathering, 24 Hundred & Wall of Sound! 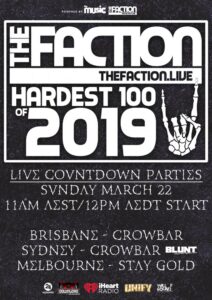