Following the release of their infectious singles ‘Somewhere Else’ and ‘Dreamers’ late last year, Newcastle punks Introvert are announcing their highly-anticIpated EP Mending Breaking will be released next month. Launching with the title track today, the full EP will drop on Friday February 21 via UNFD.

LISTEN TO ‘MENDING BRERAKING’ BELOW:

Capturing the rollercoaster of emotions that comes with trying to deal with your demons,Mending Breaking spans six tracks of alt-rock, punk and heavy. Introvert vocalist Audie Franks explains that the release hones in on the idea of self-loathing, and the feeling of knowing you’re in a rut and need to get out.

“Sometimes you get in those spaces and you want others to help you, but you also want to be able to do it yourself,” he says. “The title came about because of the idea of someone trying to fix themselves and going through cycles of mending and then breaking again. If you listen to the EP from start to finish it actually goes around in that circle of mending and breaking.”

Arguably capturing the idea of this roller coaster in full is the EP’s title track ‘Mending Breaking’. Franks explains that it stands on the heavier side of all their work, and that searing heaviness seizes the aggravation of trying over and over to piece yourself together (hear the line: “I’m struggling with everything, I always let myself down with this self-doubt, I have to pull myself out of this self doubt”.)

The EP was recorded close to home at Newcastle’s Tommirock Studios, with the band’s close friend and collaborator Mitta Norath (Endless Heights, Eat Your Heart Out) at the helm of engineering duties. A diverse yet seamless set of songs, Introvert seize an anthemic and heartfelt brand of rock on this release.

After spinning heads with their 2016 EP Old Taste, Introvert were quickly snatched up to play Groovin’ The Moo 2017 before supporting the likes of AFI, Trophy Eyes, Balance And Composure and Hellions that year. The band signed to UNFD and released their standout single ‘December’, forming a hot-bed of anticipation for their next release in its wake.

Mending Breaking is out Friday February 21 via UNFD. 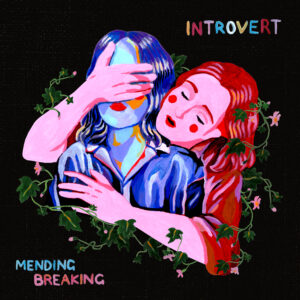