“WHAT’S YOURS IS MINE AND WHAT’S MINE IS MINE”

Canberra-based metallers Deathbeds are making their mark on Australia’s heavy community with the release of their brand new single “What’s Yours Is Mine And What’s Mine Is Mine“. The new single is accompanied by the announcement of the six-piece’s debut album entitled ‘Sinner‘. Inspired by the Seven Deadly Sins, the concept album is due for release Friday 13 March, distributed through Collision Course Records! As if that wasn’t enough, Deathbeds are also today announcing their ‘Sinner Tour 2020‘, taking special guests Teeth across Australia to celebrate their debut album.
“What’s Yours Is Mine And What’s Mine Is Mine” narrates the theme of greed and was mixed and mastered by Scottie Simpson (Polaris, Alpha Wolf, Gravemind) and tracked at Colossal Tracks Studios (She Cries Wolf, Days Like These). The single begins with an ear pricking melodic riff that leads the way into the wall of sound that ensues. Taking inspiration from fellow Australian heavyweights Make Them Suffer, Deathbeds utilise Maddison ‘Kit’ Samin‘s soaring female vocals and subtle keys to juxtapose against the driving chaos of the single.
The upcoming album is a concept record, taking its theme from the Seven Deadly Sins. The overarching storyline follows a priest abusing the sins in order of pride, greed, gluttony, sloth, lust, wrath and envy and ultimately winding up a heretic by the final track. As is with “What’s Yours Is Mine And What’s Mine Is Mine”, the album is mixed and mastered by Simpson, tracked at Colossal Tracks Studios with writing credits tied to both Deathbeds and Misstiq, the metal keys queen renowned for ‘making metal pretty’.
Deathbeds will take Sydney band Teeth out on the road with them in March to unleash ‘Sinner’ to a live audience, beginning on Friday 13th in their hometown at The Basement in Canberra. Newcastle will be up next on Thursday 19th March at Hamilton Station Hotel, Sydney’s Burdekin Hotel the very next night on Friday 20th March (without Teeth) and both bands will end the short stint in Melbourne at Last Chance Rock N Roll Bar on Thursday 26th March. Local supports still to be announced!
Formed in 2015 by guitarist Anthony Hyde, vocalist David Oliver and bassist Marc Beresford, Deathbeds dedicated three years to mastering their craft before they debuted their live show and their current lineup in 2018 consisting of Anthony, David and Marc alongside new members Kit Samin on keys and vocals, Sam Moloney on drums and Benjamin Poulsen on guitar. November 2018 rolled around shortly after and saw the release of the ‘Death‘ EP which was recorded by Calum Johnstone of Honest Crooks.
Previous track “Biggest Sin Of All” is the sixth track on ‘Sinner’ and was released in March 2019 as the first taste of the forthcoming album and was received with open arms. Hysteria Mag praised the single in saying that: “Biggest Sin Of All introduces a style of narrative not easy to execute at the best of times, let alone in a debut album–Deathbeds, however, pull it off superbly, so far”. Behind The Scene raved that “this is exactly what I wanted from Deathbeds and they have delivered everything and more. If this an accurate representation of their upcoming concept album ‘Sinner’, then I am very, VERY excited for this!“ Spotify followed suit and immediately added the track to the Homegrown + Heavy editorial playlist alongside a plethora of Australian favourites, with the track almost at 50,000 streams. Following the success of this release, Deathbeds jumped on local support slots for the likes of Slaves (US), Awaken I Am, Boris The Blade and She Cries Wolf.
With so much more to come, “What’s Yours Is Mine And What’s Mine Is Mine” is out Friday January 31 and available at all online stores and streaming platforms. Stay tuned for ‘Sinner’, out March 13 – available for pre-order from Friday January 31!

LISTEN TO ‘WHAT’S YOURS IS MINE AND WHAT’S MINE IS MINE” BELOW: 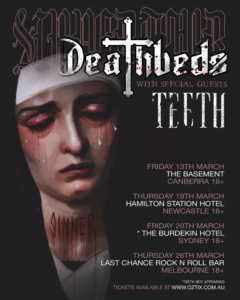