ANNOUNCE ‘THE BREAK OUT TOUR’ DATES

After ringing in 2020 with a rabid set at UNIFY, The Brave are backing it up with the announce of an Australian headline tour. Dubbed The Break Out Tour, The Brave will take in shows throughout QLD, NSW, VIC and SA kicking off next month.

Support will come in the form of rising Adelaide heavy-hittersSleep Talk, emo metallers Bad/Love and Melbourne up-and-comers To Octavia with tickets on sale from 10am AEDT Friday January 24.

WATCH THE BRAVE ‘AURA REIMAGINED’ BELOW:

In 2019 The Brave revealed their sophomore album Aura, picking up a whopping 9/10 rating from Discovered Magazine in its wake, as well as nabbing compliments from  Hysteria (“gritty, vulnerable and full of visceral emotion”), Wall of Sound (“a true demonstration of well-written music”) and more.

On their 2020 headline tour, The Brave will command stages in the Gold Coast, Newcastle, Sydney, Wollongong, Melbourne and Adelaide before rounding the festivities out in their hometown of Brisbane. Tickets are on sale from 10am AEDT, Friday January 24.

LISTEN TO ‘AURA’ – OUT NOW VIA UNFD 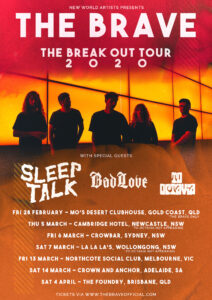