After making their highly anticipated return to the stage in 2018, beloved Aussie band Motor Ace are hitting the road for a run of summer shows, kicking off next week at 48 Watts in Newcastle on January 25, before heading to play Festivale in Launceston on January 31, Coopers Ale House in Adelaide on February 21, and finishing up playing Hotter Than Hell in Dunsborough (WA) on February 22.  They will also be jumping on stage and doing what they do best to help Aussies in need, playing a bushfire benefit show on-ground in Sale, East Gippsland on Australia Day.

“We all loved getting the band back together and had a really great time on the road last year, so when we were asked to do a few more shows, we were excited to take them on.  It was such fun to get out and play and we’re soo humbled that our fans haven’t forgotten us!” says drummer Damian Costin.
Passionate about helping those caught up in the bushfires that ravaged East Gippsland on new year’s eve, Motor Ace are keen to do all they can, Costin enthuses, “Words won’t fix anything right now.  Action is required, and getting down into the Gippsland area to do a benefit show is important to us.  So all ticket sales will be passed on in cash form, straight to those in the area that need it most.  There’ll be auctions, the hat is getting passed around and we are having a bbq to bring some slight relief to the area.  We’re hoping to get Melburnians along to spend some money in the community as well, donations are great, but actually getting in your car and heading down to eat, stay and be there is massively important right now too.”

With a rich musical history spanning over twenty years, Motor Ace’s debut album Five Star Laundry went gold within the first month of going on sale in Australia. After that massive feat, the band spent many months on the road touring and making music, with massive supports slots alongside Foo Fighters, Oasis and Blink-182.  You couldn’t turn on the radio without coming across Motor Ace; and as sold out shows became the norm, their tracks became a mainstay on the ARIA charts.  Their timely sophomore album Shoot This was released in 2002 to abundant critical acclaim.  It spawned lead single Carry On that held the coveted #1 most played song on Australian airwaves for 8 weeks in a row, and Shoot This, debuting at #1 on the charts and achieving gold sales on release.

Can we expect to hear a new Motor Ace tune any time soon? “Patch and Dave have been writing new music and we had a session in the studio late last year, the expectations are high, so we can’t drop anything until it’s really right.  The magic was there and that’s what is important to us, to find the magic,” beams Costin. “And quality takes time, and time is something we don’t have a lot of.  But I can confirm what we have been working on sounds fucking brilliant, better than anything that currently exists in this solar system.  The new tunes are like a universe of rainbows and magical musical notes sprinkled with pools of baby dolphins and fluffy pink sun lounges with a cocktail bar in your ear!”

SUN 26 JAN | LIVE AT THE BUNDY HALL, SALE, VIC | ALL AGES
Tickets available from www.trybooking.com | 1300 GET TIX | All Trybooking Outlets 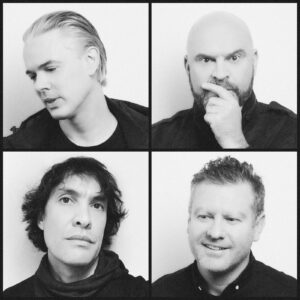 Keep up with Motor Ace –